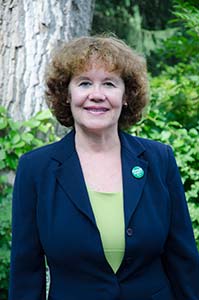 I am running as a life-long resident of this state which once was known as the Empire State and with good reason. At one time, we had a solid manufacturing base, affordable housing, robust economy, an outstanding education system with a superb college system. In 1969 I was able to attend CUNY's Brooklyn College for only a $17 activities fee per semester and no tuition costs. I received a Regents Scholarship which covered all my books and expenses. I could never have gone otherwise. We had opportunities then that no longer exist. And why not?

I had been searching for a party for many years, one that would welcome input, new ideas, thoughtful dialogue and a willingness to fight the good fight. One that would rally against the ignorance and the greed pervasive in much of this country. One that reflected shared values and promoted environmental awareness, diversity and communities of justice. In other words – the Green Party.

My professional and career background includes over 35 years in civil service positions working for New York City and New York State in upstate New York. I have counseled troubled, court involved youth in the South Bronx and I have managed multi-million dollar budgets statewide. I have served on the Albany City School Board and oversaw a budget the size of the city's itself. I have worked in institutions, schools and youth jails. I know very well about the school to prison pipeline. I have seen much that needed to be changed and I have changed much.

As I have experienced life, I have gotten stronger and am no longer willing to settle for the Status quo. I have sought out and thankfully have found an alternative for my voice, which is the Green Party. The issues we represent are too important to ignore or postpone. Their very inaction on these issues calls us, citizens who care and are willing to fight, to action.Let us not sacrifice a moment of inaction or fear when we could be fighting doing otherwise. Let us be one in action. With the active support of the Party, I did run for the Mayor of Albany in 2013. As the Green Party Mayoral candidate, I energetically campaigned each day from Primary Day to Election Day, participating in numerous debates and interviews, talking with thousands of voters. Ultimately, I received almost 5% of the final vote despite an overwhelmingly Democrat electorate with a loyalty to the Democratic Party without equal.

But victory isn't always measured in votes. We were victorious by participating in the democratic process and introducing the Green Party to segments of Albany that never heard of us. We promoted the values of sustainability, accountability and economic justice and voters responded.We spoke up for the land value tax system as an alternative to the property tax. Whether through face-to-face interactions or through my robust social media effort we energized many Albany residents to consider the Green Party. And many did. And more will.

I learned that our message is a good message but voters need to be convinced that the Greens are a viable alternative to government-business as usual. And they will need to be brave also to challenge the party in power. We need to continue to not only offer new solutions to old recalcitrant problems, but also to offer hope, excitement and support for the voice of the courageous.

I am also a proud but concerned member of the State's Pension Fund. This system with a present worth of $176 billion should be managed not only with financial profit as its goal but also community, climate, environmental awareness, transparency and ultimate sustainability. I have a personal interest and investment in a system that will fund my retirement years as well as many others. In this economy we are the lucky ones and we know it. The fund's return must be measured not only financially but also ethically and morally. What is the impact and what can the impact be on our earth, our future and our communities?

I want to be in a position to not only follow the money but to make sure the money will be followed. I am an activist and an experienced problem solver. I see a need for courage and leadership for all of these important issues and I will be part of the solution. This is a worthy effort and a necessary effort. We are at a point when the stakes cannot be higher. We are literally fighting for the future of our planet and I invite you to join me in battle.

Throughout this campaign I will raise issues that define and influence our future in New York State. I will be talking about:

Progressive tax and budget policies, especially the need to restore revenue sharing with local governments and school districts, many of which are in fiscal distress and facing insolvency

Retaining, not rebating 100% of the Stock Transfer Tax ($12 to $16 billion a year in revenue in recent years)

A much over-due discussion on the role of the Comptroller, right now the sole trustee of the pension fund and the need for a board of system stakeholders to transparently advise and contribute to the management the fund

A state bank (similar to North Dakota's) to finance public projects and economic development (including a clean energy transition) at lower cost than private lending because the state, not Wall Street, receives the interest. The State deposits its cash reserves in its own bank instead of Wall Street banks

Setting up a system of social and environmental accounting and auditing for the natural, human, and social capital of the state

The continuing crisis of housing affordability, foreclosures, and mortgage fraud and exposing the economic waste of $7 billion a year in corporate tax breaks and subs

I invite you and all citizens who care about these issues to join me and the entire Green Slate to make change happen.