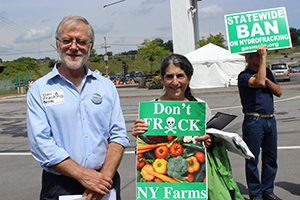 (State Fair, Syracuse NY) Howie Hawkins, the Green Party for Governor, said today that one of the reasons he supports a ban on hydrofracking of natural gas is to protect water supplies and farmland.

Hawkins participated in a rally against fracking at the State Fair today.

Hawkins said as Governor he would promote strong regional food systems, increasing markets for New York farmers and help family farmers. He said while Cuomo has promoted himself as a supporter of local food, his administration has often resisted efforts to increase the state purchase of local foods.

Hawkins said that hydrofracking will turn upstate New York into an industrial wasteland of drilling rigs, pipelines and compressor stations, storage ponds for toxic flow back water, and polluted ground water and aquifers. It will destroy our abundant clean water resources.

“Natural gas is a grave threat to our climate. Gas is just another dirty fossil fuel whose greenhouse gas emissions will accelerate global warming. It is not a bridge to the renewable future as the gas industry claims. That bridge is out and if we take that road we will go over the cliff into climate catastrophe. We don't have the precious time to waste on a decade of natural gas dependence. If we do that, it will be too late to turn to renewables to stop runaway global warming,” noted Hawkins.

Hawkins’ Green New Deal would create millions of jobs for New Yorkers by investing in a transition to a 100% clean renewable energy economy by 2030.

Hawkins said he would dramatically increase state funding to $100 million annually to purchase development rights from farmers to preserve the open land and to ensure food supplies in the future, especially as global warming worsens. He would also increase state support for small- and medium-scale food processing, and would better market New York grown products. He would overhaul the existing Grown in NY program at Ag and Markets. Hawkins said his overall policies would reduce the tax burden on farmers.

“A strong agricultural economy is the basis for revitalizing rural economies, repopulating rural communities, and supplying our cities with healthy food. Agriculture provides the value added that fuels commerce in the towns. It should fuel the expansion of clean green manufacturing based on biodegradable food, fuel, and fiber feedstocks. Agriculture maintains the rural landscape that is the foundation for tourism and recreation, including hunting and fishing,” said Hawkins.

Hawkins said as Governor he would promote a transition to organic agriculture, not only to grow healthier foods but to help reduce climate change. Present agriculture practices are a significant contributor to greenhouse gas emissions.

A recent study by the Rodale Institute found that if management of all current cropland shifted to reflect the regenerative model as practiced at the research sites included in the white paper, we could potentially sequester more than 40% of annual emissions. If all global pasture was managed using a regenerative model, an additional 71% could be sequestered. (http://rodaleinstitute.org/regenerative-organic-agriculture-and-climate-change).

Hawkins is a longtime advocate of the Farmworker bill of rights.

“We need to ensure that all the workers in the food system – farmers, farmworkers, and those in retail – earn a living wage with safe working conditions,” said Hawkins.

Hawkins is an opponent of genetic engineering of the food system. He supports legislation on labeling of GMO foods and a moratorium on the planting of GMO crops.

Hawkins’ agriculture platform is at http://www.howiehawkins.org/sustainable_agriculture