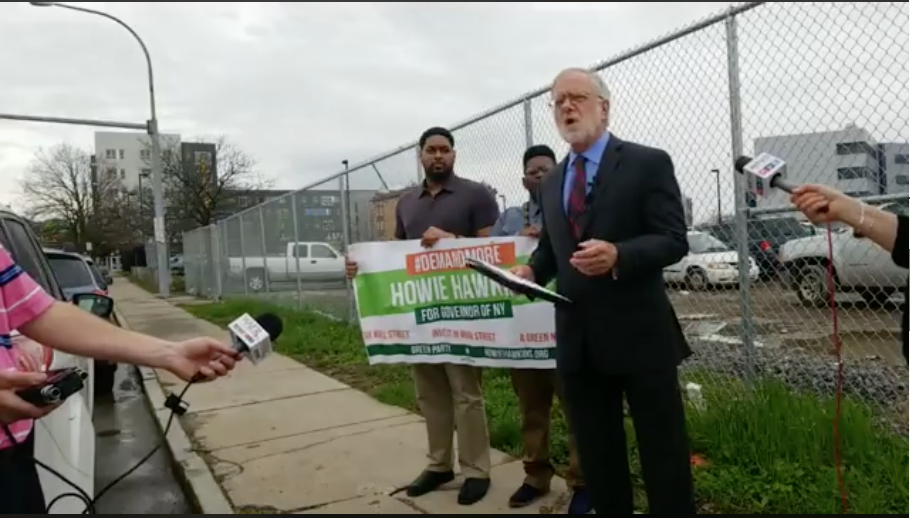 When: Friday, May 4, April 25, 11:00 amWhere: Site of the former Kennedy Square public housing project on S. Crouse Ave. between E. Water and E. Fayette streetsWho: Howie Hawkins and former Kennedy Square residentsHowie Hawkins will lay out his case for a massive expansion of public housing as the only way to make low-to-middle income rents in the larger rental market affordable. He will explain how that centerpiece of his housing policy complements his other housing policies, including rent regulations, inclusionary zoning, and fair housing enforcement.Hawkins will criticize Governor Cuomo’s 10-year, $20-billion affordable housing program for being fiscally wasteful and an invitation to pay-to-play corruption because it conveys public money to private developers and landlords whose first allegiance is to their private interests, not the public interest.Hawkins will speak at the site of the former Kennedy Square 400-unit public housing project, which was torn down in 2013 in a no-bid, no-money-down deal that turned Kennedy Square over to a joint venture owned 75% by COR Development and 25% by SUNY Upstate Medical University. Six people involved in that deal — David Smith, Alain Kaloyeros, Steven Aiello, Joseph Gerardi, Todd Howe, Joseph Percoco — are now answering for various pay-to-play crimes, including padding a state salary, bribery, honest-services fraud, wire fraud, or other crimes.
Nothing has been built at the Kennedy Square site. No affordable housing units were built in Syracuse to replace the 400 units lost. The site is now the parking, equipment, and materials staging area for construction across E. Fayette St. for an upscale apartment complex with rents ranging from $1,400 to $2,500 per unit.Hawkins will also address the reconstruction of public housing proposed by the Syracuse Housing Authority for the Pioneer Homes/Central Village area and how that kind of mixed-income, mixed-use public housing design should be extended into the land that will become available if the Community Grid option, which Hawkins supports, is chosen for I-81 reconstruction.
Posted May 03, 2018 5:41 PM
Share
Add your reaction

On May Day, Hawkins Calls for a Right to A Living Wage Job, Make NY a Sanctuary State

SYRACUSE, 05/01/2018—Hawkins, the Green Party candidate for Governor, said today that he would make New York the national leader in advancing worker and immigrant rights.

Hawkins, who participated in May Day events in Syracuse, is a retired member of the Teamsters. He has long advocated making New York a Sanctuary State for immigrants and undocumented residents by enacting the Liberty Act. He campaigned for a $15 minimum wage, with indexing, in his 2014 Gubernatorial campaign, along with the Farmworker Bill of Rights. He has long advocated for stronger union organizing rights (including card check union recognition and a Wrongful Discharge from Employment Act to require a just cause for termination from employment).

Hawkins' platform (http://www.howiehawkins.org/issues) outlines numerous proposals on worker and immigrants rights, including the NY Dream Act; Drivers Licenses for Undocumented Immigrants; and expansion of the Liberty Defense Project by increasing funding for legal services to immigrants to $20 million. He opposes cooperation by New York officials with the anti-immigration efforts of the Trump administration.