Though Mark Molinaro (R) was not present, he was represented by Julie Killian, who is running alongside him for lieutenant governor.

“High taxes, the crumbling infrastructure, the corruption, the high-energy costs, the poor inner city schools — those are all choices. We don’t have to make that choice; we can make a new choice on Nov. 6,” said Killian.

Hawkins said he chose to represent the Green Party because “the major parties can’t solve problems, simple problems,” like lowering the cost of living and doing business in New York. “Vote for what you want and make the politicians come to you — don’t vote for the lesser of the evil, because you’ll just get lost in the sauce.”

Jia Lee, a fourth- and fifth-grade special education teacher at The Earth School in the East Village who is running as the Green Party's candidate for lieutenant governor, said time off will not be an option for her even as Election Day nears. Not only is she a single mother and sole provider for her son, a high school student, but she communicated to the campaign early on where her priorities as a teacher would lie. "Establishing a sense of community and continuity is so important, so taking time off from the classroom doesn't feel like an option," she said. Read more here.

Hawkins, who was among the Green Party co-founders and is a perennial candidate who ran for governor in 2010 and 2014, has since launching his 2018 campaign in April made social, racial, and environmental justice again at the center of his vision, including tenets like desegregating public schools and improving environmental sustainability. He hopes to gain the votes of the 26,462 active Green Party voters in the state along with others on the left disappointed with the governor.

“We call it the Green New Deal,” he told Gotham Gazette on Monday in an interview. “Basic economic human rights, the right to a job or an income above poverty, comprehensive healthcare, a decent home, a good education…Those are the things [President Franklin Delano] Roosevelt said in his last state of the union address that ought to be part of a second Bill of Rights.”

Hawkins, who in Syracuse has run for Common Council, mayor, and auditor, said the plan would create an “economic boom” and that Democrats have pushed for similar policies but have “watered down the content.” A socialist, Hawkins says capitalism is the enemy of sound environmental policy.

“Capitalism's blind, ceaseless growth is devouring the environment,” he said in April. “As long as workers are bound to a fixed wage and capitalists take the remaining value that labor creates as profit, the rich get richer and the rest of us struggle to make ends meet. We need more social ownership and democratic planning to provide a decent standard of living for all that is ecologically sustainable.”

BACKUP LIBERAL? Howie Hawkins, Green Party candidate for governor, is wooing voters who cast a ballot for Cynthia Nixon in the recent Democratic primary, saying he can be their "plan B."

Hawkins says he is the natural choice for liberals who had hoped the longtime activist and former "Sex and the City" star would oust Cuomo.

Hawkins placed third in the 2014 gubernatorial election against Cuomo and Republican Rob Astorino. He formally kicked off his 2018 run last week in Syracuse.

Hawkins said he's an "eco-socialist" who will push for single-payer health care, higher taxes on the wealthy, more funding for subways and transit and a "Green New Deal" that does more to encourage renewable energy and eliminate fossil fuel demand.

"The good news is that we largely know how to move to 100 percent clean energy while creating millions of jobs, eliminating needless deaths from air pollution, and lowering energy costs," he said. "All we need is the political will to act and the Greens have that in abundance." 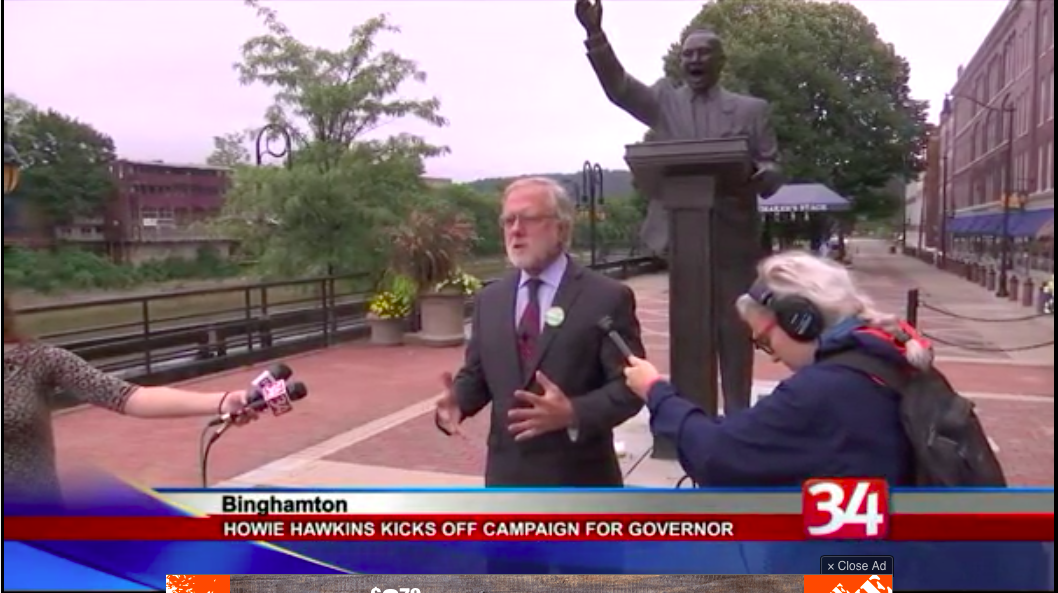 Wage theft can even happen to unionized workers

BROOKLYN (Workers World Today) — National studies have shown that one-third of low-wage workers experience wage theft every week. Two-thirds have had wages stolen at some point in their work lives.

Employers use a variety of means to avoid paying wages their workers have earned: working them off the clock, failing to pay overtime, failing to pay the minimum wage, and simply disappearing without paying, an occurrence that is too often experienced by workers who are hired by contractors for temporary laboring jobs in construction, demolition, landscaping, and truck loading, hauling, and unloading.

But it is not just low-wage workers in smaller businesses who face wage theft. A study based on a compilation of court cases by Good Jobs First and Jobs with Justice found that wage theft is built into the business model of some of America’s biggest corporations. Walmart, with $1.4 billion in total wage theft settlements and fines, is the worst offender, followed by FedEx with $502 million. Retailing is the industry with the highest aggregate penalties ($2.7 billion), followed by financial services ($1.4 billion), freight and logistics ($828 million), business services ($611 million), and insurance ($557 million). Among top offenders are household names like Bank of America, Wells Fargo, JPMorgan Chase, and State Farm Insurance.

Green Party gubernatorial candidate Howie Hawkins has billed himself as Plan B for progressives, following the defeat of Sex and the City star Cynthia Nixon in the New York State Democratic Primaries. Hawkins is a retired teamster from Syracuse running on a platform of housing and education reform, legalization of recreational cannabis,...

Politics on Parade in Binghamton

If you are a fan of meeting politicians up close, September 21 is your lucky day with a virtual parade of politics in Binghamton.

Republican and Conservative candidate for New York State Attorney General Keith Wofford is holding a news conference to talk about corruption at 11 a.m. at the Broome County Public Library on Court Street.

The Green Party candidates for New York Governor and Comptroller are discussing issues in Binghamton.  Gubernatorial candidate Howie Hawkins is kicking off his run for the general election at 11:30 this morning at the Peacemaker Stage on Court Street.  He is being joined by Comptroller candidate Mark Dunlea.