Former Syracuse mayor Stephanie Miner (2 percent), who is making an independent bid for governor, and Green Party nominee Howie Hawkins (2 percent) of Syracuse were struggling to break out of the pack days before the election, the poll found.

Libertarian candidate Larry Sharpe has 3% of the vote, while Green Party candidate Howie Hawkins and former Syracuse Mayor Stephanie Miner of the newly created Save America Movement party each have 2%, the poll found.

But that’s a smaller gap than the 22 percentage point difference that existed between them in October, when Cuomo led 50 percent to 28 percent.

Seven percent of voters are still undecided. Cuomo is seeking a third term this year and the independent party candidates, Larry Sharpe, Howie Hawkins and Stephanie Miner, all received less than 5 percent of support in the poll.

Howie Hawkins, a shipping company line worker from Syracuse, is making his third bid for governor on the Green Party line. He chides Gov. Andrew Cuomo for failing to clean up corruption, and favors replacing the Excelsior Scholarship with a true free-tuition program, implementing a single-payer health care in the state, and committing to a 100 percent clean energy plan by 2030.

“What I want to do is restore taxation on the rich, have the state pay for its own funded mandates, and restore the revenue sharing they used to provide, so we can cut local property taxes and provide better services that are local,” said Hawkins.

Howie Hawkins, Green Party candidate for Governor of New York, is appearing at three locations around the state today to talk about his vision for ending inequality in New York. His speech advocating for an equitable economy, first given in Syracuse this morning, is reprinted with his permission. 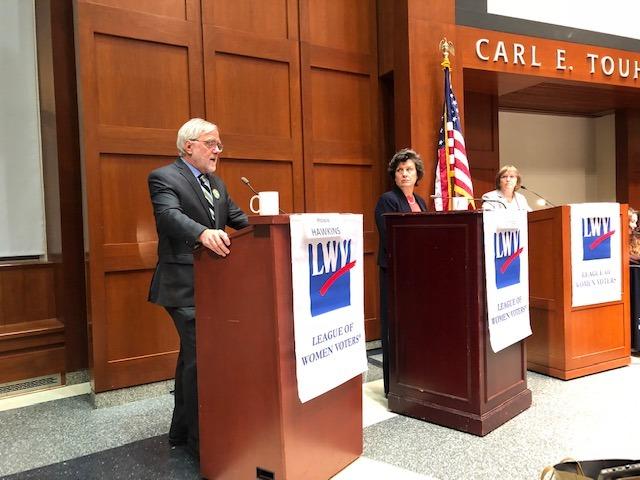