Howie Hawkins, the Green Party candidate for Governor, called today for the Governor “to stop taking campaign donations from those seeking contracts from the state – which he said he would do in 2016 after the Buffalo Billion bid rigging scandal first broke. The man is addicted to extracting as much money from donors as possible and continues to shake down those doing business with the state despite however many of his staff and state legislators are convicted for political corruption. It is time for an intervention to protect taxpayers.”

Cuomo’s broken promises with respect to stop taking “Pay to Play” donations are laid out in an article in the Albany Times Union. Pay to Play refers to companies and individuals seeking to do business with the state making campaign contributions.

“Cuomo is the kingpin of the cesspool of political corruption in Albany. He continues to rake in dollars while blaming inaction by the state legislature for his failures to pass even modest ethics reform. But he has spent eight years making sure that the legislature is dysfunctional, continuously helping to prop up the Senate Republicans,” noted Hawkins.

Will Join the NYC Protest on June 30 To Support Immigration, Reunification of Families

Howie Hawkins, the Green Party candidate for Governor, denounced Tuesday’s 5-4 Supreme Court decision upholding the so-called Muslim Ban “as yet another action of a rogue Supreme Court that puts reactionary political beliefs ahead of the facts and fundamental constitutional rights.”

Hawkins said the decision grows out of decades of racist, Islamophobic, and xenophobic policies fueled by both major parties, growing out of 9/11, the so-called War on Terror and white nationalist opposition to immigration.

Hawkins, who has long campaigned to turn New York into a “Sanctuary State” for immigrants, said that “providing a safe harbor for refugees is the morally right thing to do, and that in order to enact any reasonable immigration policy we need to get the racist leadership of Trump and Sessions out of office.” Hawkins noted that immigration has always enriched New York’s economy.

Greens on the PSC

Howie Hawkins, the Green Party candidate for Governor, said today that a Green Party member should be appointed to fill the vacancy in the Public Service Commission.

By state law, no more than 3 members of any one party can be appointed to the 5-person Public Service Commission, which oversees the electric industry in New York. The legislature recently adjourned without the Governor nominating anyone to fill the present vacancy. The existing term of a second member also expired in February.

“We need a strong consumer renewable energy advocate on the PSC to stand up to the Governor and utility companies. As we heard in the recent Percoco corruption trial, the PSC has become little more than a rubber stamp for Cuomo rather than an independent body looking out for the well-being of the state’s ratepayers. Thus we get a PSC that approves a $7.6 billion bailout for 3 upstate nuclear power facilities and which blocks the development of community solar farms by prematurely changing the net metering rules,” said Hawkins. 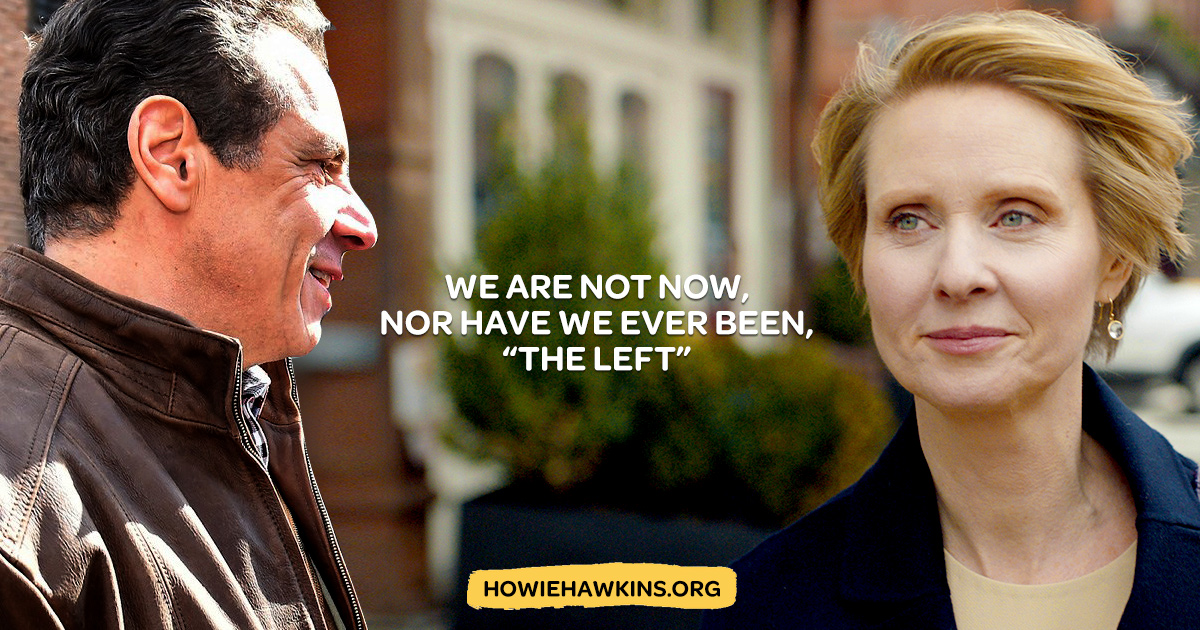 New Teacher Evaluation Bill is all Smoke and Mirrors

Contrary to what its proponents claim, the New York bill on state assessments and teacher evaluations (A10475/S8301) does not eliminate using student scores on standardized tests to evaluate teachers. It just makes high-stakes testing for teacher evaluations subject to collective bargaining, while keeping the ranking of schools by test scores in place, a practice that is used to justify public school closures and privatizations as charter schools. The bill has passed the Assembly and is now in committee in the state Senate.

On Monday, April 23, I am once again risking arrest as a nonviolent civil disobedient to protect the climate with safe energy.

The march, rally, and civil disobedience at the state capital in Albany is called “Cuomo: Walk the Talk on Climate!” Our three demands are stop all fracked-gas infrastructure projects, move to 100% clean renewable energy, and make corporate polluters pay.