This weekend was a turning point. It's never been clearer that the ONLY gubernatorial candidate who actually stands with working families throughout New York is Howie Hawkins. 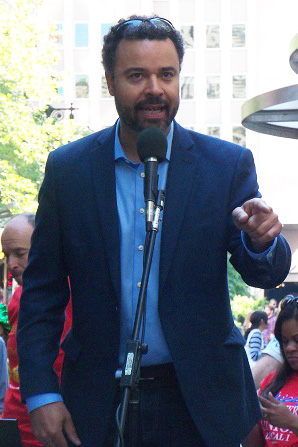 At the heart of our campaign is the struggle to defend and improve public education. Cuomo has made it clear that he supports the corporate privatization of our schools. That's why Howie Hawkins asked Brian Jones, a long-time public school teacher and activist to be his running mate. As Howie said to a standing-room only crowd in New York City this weekend, "We don't hesitate to challenge Cuomo, we're ready for this fight."

The Hawkins for Governor campaign calls for the kinds of policies that working families desperately need: a $15 minimum wage, a jobs program focused on building up the public sector, fully funded public education including tuition-free higher education, commitment to climate action and a renewable energy future, and an end to the racist war on drugs.

Financial independence is the basis for political independence. Like you, we're disgusted by the Democratic Party's sleazy back-room deals lubricated by million-dollar bank accounts. We can't build a genuine alternative unless we have financial support from the 99%. Please, donate what you can to the Hawkins/Jones campaign right now. Every donation matters.

And if you haven't yet, sign up to be a campaign volunteer.