This article appeared in CounterPunch on May 17, 2019.

The Climate Science Behind the Targets

What follows is a summary of the climate science that indicates why we are at the brink of dangerous climate change and what we must do about it.

Public Hearing to discuss the Climate and Community Protection Ac

This statement was published by New Politics on January 20, 2018.

I campaigned for governor with the slogan of “Demand More!” because Gov. Cuomo has governed as a social liberal but as an economic conservative. Although he touts the agenda he outlined in his January 15 State of the State and Budget presentation as “progressive,” New York progressives should not be satisfied. It is still a conservative economic program. Progressives must demand more.

This article was was published in the Gotham Gazette on January 14, 2019.

In outlining his agenda for the first 100 days of his third term, Governor Cuomo said in December he would launch a Green New Deal. I have been calling for a Green New Deal since 2010 in three Green Party gubernatorial campaigns against him.

Cuomo has already nominally adopted a number of my platform planks, including the fracking ban, marriage equality, a $15 minimum wage, tuition-free public college, paid family leave, and legalization of marijuana. Unfortunately, the implementation of some of these measures fall short of full realization and the same appears to be true for what will be Cuomo’s Green New Deal.

The Green Party’s Green New Deal would fulfill the full promise of the original New Deal as articulated by President Franklin Roosevelt in his last State of the Union address in 1944 when he called upon Congress to enact a second, economic bill of rights, including the rights to a job, an adequate income, decent housing, comprehensive health care, and a good education. What makes it a Green New Deal is that the rapid build out of a 100% clean energy system would provide the sustainable economic foundation for the realization of economic human rights for all.

The November 11 federal holiday of Veterans Day was originally Armistice Day. Its purpose was to celebrate peace on the anniversary of the conclusion of World War I.

The congressional proclamation of Armistice Day in 1926 said its purpose was “to perpetuate peace through good will and mutual understanding…with appropriate ceremonies of friendly relations with all other peoples.” In 1938, Congress made it a federal holiday, declaring it “shall be a day dedicated to the cause of world peace.”

In 1954, however, with the permanent war economy entrenched after World War II and the Korean War, Congress changed Armistice Day to Veterans Day. The meaning of November 11 was changed from honoring peace to honoring war. Militarism and nationalism became the dominant themes.

Thank You, Congratulations, and What's Next 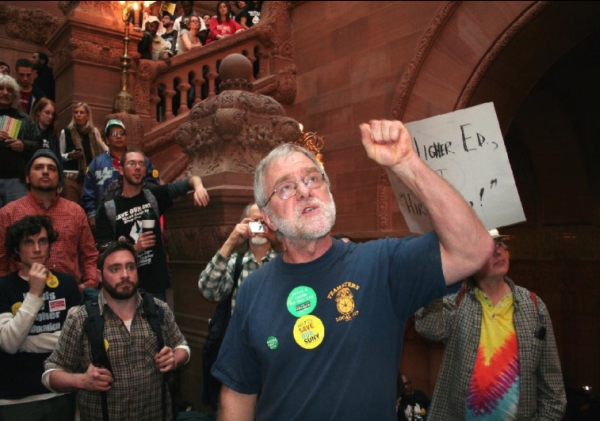 Congratulations to all of us for achieving our baseline goal in this election – retaining the Green Party ballot line statewide for the next four years.

Thank you to all of you who leafleted, phone banked, text banked, organized events, donated, and voted for the cause.

We live to fight another day. Between the collapse of the climate and the living standards of working-class New York, we have to keep fighting.

This commentary appeared in News Growl on November 3, 2018 and Workers World Today on November 6, 2018.

Worker Cooperatives: Keep the Full Fruits of Your Labor

This commentary appeared in Workers World Today on October 22, 2018.

BROOKLYN (Workers World Today) — When we work in a capitalist business, we produce more value than we receive in wages. It’s called exploitation. A rich class lives high off the hog on the labor of a working class. Under slavery, it was  slaveowners exploiting slaves. Under feudalism, it was the landowners exploiting serfs. Under capitalism, it is capitalists exploiting wage workers.

In a capitalist business, our wage as workers is fixed. But the business owners take all the net income for themselves as profits. Because most people earn their living working for the tiny class that owns most business assets, the rich get richer and the rest of us struggle to pay our bills.

The other problem with working for a capitalist is you lose your freedom. The owner – or the supervisor he hires to boss you around – makes you work as directed if you want to keep your job. You have little say in how to get your work done, even if you know your job better than your boss, which in my experience has been quite often.

In a worker cooperative, each worker receives a salary during the year and then at the end of the year a share of the cooperative’s net income – a “patronage dividend” –  that is proportional to the labor each worker contributed. The workers collectively make management decisions or, in a larger business, elect the board that hires the managers.

Each worker has one vote, no matter how big or small their ownership share of the business.

Statement in Response to Recent Shootings in Syracuse

Two youth, ages 12 and 15, were shot dead this week in Syracuse. Five people were shot right around the corner from my house three weeks ago. Their families and loved ones are in my thoughts.

It is no mystery where most of these youth shootings occur. They are endemic to high-poverty urban neighborhoods across the country, particularly in communities of color that are segregated and isolated by pervasive discrimination.

These shootings stem from the hopelessness, anger, and trauma of young people who start life deprived and often disabled physically, mentally, and emotionally by malnourishment, lead poisoning, periods of homelessness, and other readily solvable social and environmental conditions. They see the people in their neighborhoods in the same boat and hear a dismissive message from the larger society that their situation is their own fault.

Nor is it a mystery what we need to do about it. We need to end poverty and discrimination. The correlation of violence with social inequality and poverty is strong and global.