Cuomo’s campaign manager is a lobbyist. Does it matter?

Cuomo’s campaign manager is a lobbyist. Does it matter?

Those connections were being exploited Tuesday morning by Cuomo’s opponents, including by Howie Hawkins, the Green Party’s candidate for governor.

A senior adviser on Cuomo’s 2010 campaign, Moran went on to build a successful public relations business, which after a 2015 merger became the major firm Kivvit, where Moran is managing partner.

Gov. Andrew Cuomo speaks during an announcement where he signed legislation to protect against sex trafficking in New York on Aug, 15, 2018, at the Manny Cantor Center in Manhattan, N.Y. (Office of the Governor)

A look at Kivvit’s current and recent lobbying clients, disclosed on the website of the state Joint Commission on Public Ethics, shows a number with business before the Cuomo administration, including a gas pipeline operation, Williams Companies, which is seeking state approval for a contentious project.

Those connections were being exploited Tuesday morning by Cuomo’s opponents, including by Howie Hawkins, the Green Party’s candidate for governor.

Kivvit’s leaders, however, say they’re only registered as lobbyists because of recent actions by JCOPE – and aren’t directly lobbying anyone in the Cuomo administration.

Earlier this year, JCOPE passed new regulations that greatly expanded the definition of lobbying. Now, it’s not just traditional lobbyists — the kind that physically buttonhole lawmakers at the Capitol — who have to register.

According to Bamberger, Kivvit employees never set up lobbying meetings for clients, and never use their Cuomo connections to directly lobby administration officials – or any other government officials, for that matter.

In fact, it’s often in their contracts that they don’t do such direct lobbying, he said.

“In New York, the law has changed forcing communications firms to register as lobbyists if they create work such as digital or newspaper ads even if there is no interaction with lawmakers or state agencies which is the situation that Kivvit finds itself in,” Bamberger said. “Kivvit holds itself to the highest standard and it’s our hope to raise the bar on transparency and disclosure.”

Under the new definition of lobbying, Kivvit, even though it’s a public relations firm, has registered as a lobbyist for a long roster of clients with state government business, including:

The company is seeking to build the $1 billion “Northeast Supply Enhancement” natural gas pipeline, which would go from Pennsylvania to New York. The Oklahoma-based company hired Kivvit for $5,000-a-month in September, 2017.

Cuomo has been increasingly against the construction of new natural gas infrastructure.

In April 2018, his Department of Environmental Conservation denied Williams’ permit application “without prejudice” since the application was incomplete. That keeps the project alive for the moment, although DEC is also raising environmental concerns.

On Twitter on Tuesday, New York Communities for Change, a liberal grassroots group in New York City that supports Cuomo’s Democratic primary challenger Cynthia Nixon, called out Moran as well for her work for Williams. 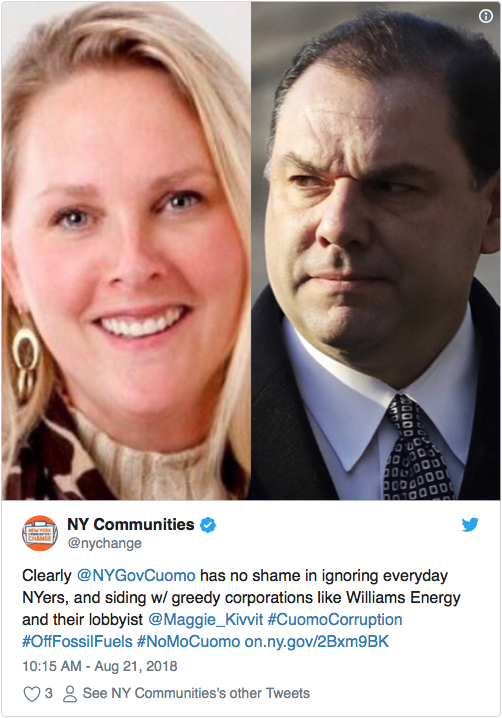 Joe Percoco's work for a private companies while managing the 2014 Cuomo campaign – while he was on leave from his top post in state government for eight months – formed the center of his corruption trial and conviction on three charges in March.

Moran's situation is different: Not only is there no indication she has engaged in any wrongdoing, but unlike Percoco, she's not expected to return to a top post in state government after the campaign. Moran has never worked in the Cuomo administration. Also, Percoco had private clients while he was campaign manager, whereas Moran is on leave from her lobbying firm.

The Chicago-based company is benefitting from billions in subsidies that were the center of a Public Service Commission plan to bail out three struggling nuclear power plants.

The plan, which Cuomo said would save hundreds of jobs and reduce greenhouse gas emissions, was announced in August 2016; Exelon had retained Kivvit two months earlier, according to lobbying records.

Since then, an Exelon lobbyist has been caught bragging about his company's windfall relative to the cost of its lobbying and public relations campaign.

Other Kivvit clients include several building trades unions (who Cuomo did well by in 2015 negotiations over the 421-a tax abatement program used by developers) and the New York State Nurses Association.

When nurses mounted a union drive at Albany Medical Center earlier this year, Cuomo launched a probe into whether management was coercing nurses to vote against unionization. The governor in April attended a NYSNA rally celebrating the unionization victory.

On June 1, Kivvit reported being paid $1.2 million by NYSNA for a campaign for the "Safe Staffing Act." On June 22, Cuomo issued a press release stating that next legislative session, he would press for such legislation.

Here's an example where a Kivvit client did not do well with the Cuomo administration. In July, DEC rejected long-gestating plans for a propane gas storage facility that Crestwood wanted to build in the caverns of Seneca Lake.

Kivvit employees registered as lobbyists under the advice of David Grandeau, a private attorney retained by the company, who used to be New York's top lobbying official.

"In the absence of clear guidance, I advised all my public relations clients to register," Grandeau said. "I would encourage all public relations firms, especially those working for political campaigns, to disclose as much information as we do."

Senior advisors to Nixon's campaign, Bill Hyers and Rebecca Katz, work for a different major firm, Hilltop Public Solutions, which has only ever registered as a lobbyist with JCOPE for two clients.

Katz told the Times Union on Tuesday that the firm currently had "no state business."