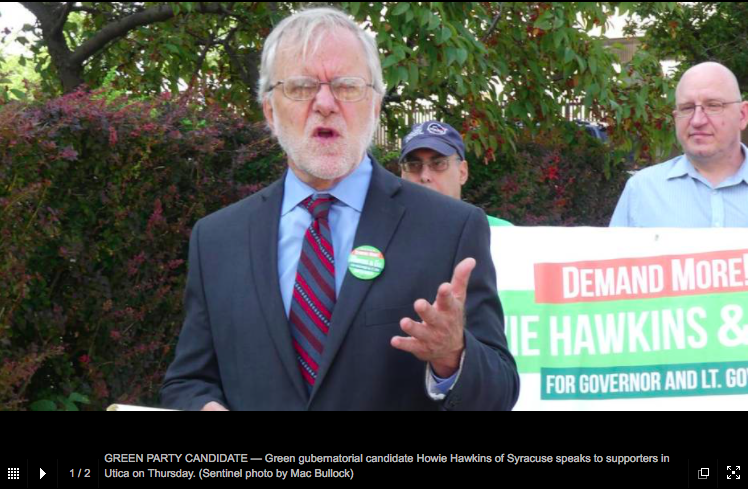 Hawkins described the Democratic governor as being in a “very corrupt, pay-to-play culture, handing out benefits to the rich and corporations.”

“That’s the reason we have all the people around Cuomo going to prison,” Hawkins charged, apparently referencing Cuomo aid Alain Kaloyeros, convicted last month in the bid-rigging scandal connected to the governor’s Buffalo Billion development project.

He added it was “amazing (Cuomo) hasn’t been caught, because he’s known as a details guy.” 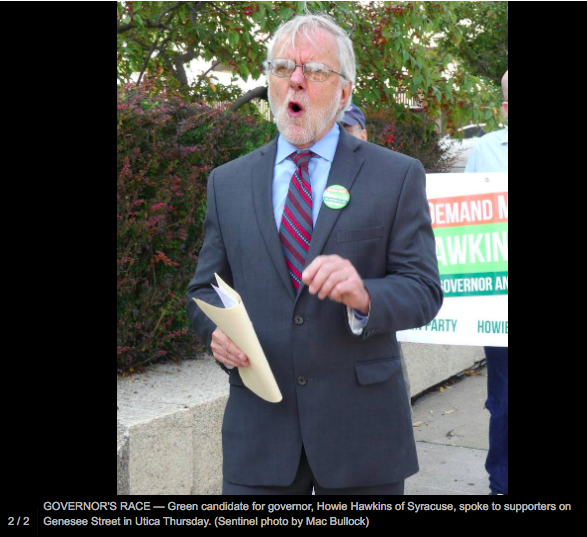 Pivoting, Hawkins touted his own plan for upstate’s economy. “What we want to do is have a green New Deal for New York,” he said. “This is like the old New Deal that provided jobs and public services, housing, school and health care.”

“This is a massive undertaking, and it will be a boon to the economy as well as necessary for the climate.”

Hawkins, a resident of Syracuse, worked to cast Utica and similar upstate cities as the victims of Cuomo’s development policies.

“This is one of those smaller rust belt cities that’s having a hard time,” he said.

“All of Upstate is in hard times, and we spent billions of dollars in economic development, but it’s all about tax cuts and subsidies for the very rich and corporations.”

Hawkins’ 2018 run marks his third bid to unseat Cuomo, having received the Green Party nomination in 2010 and 2014. He said Thursday that his next campaign stop will be in Poughkeepsie, and that he will visit Rome on Sept. 10.

Hawkins is joined by actress and activist Cynthia Nixon, D-Manhattan, in running to the incumbent Cuomo’s left. Dutchess County Executive and former state Assemblyman Marcus Molinaro, R-Tivoli, received the GOP nomination in May.