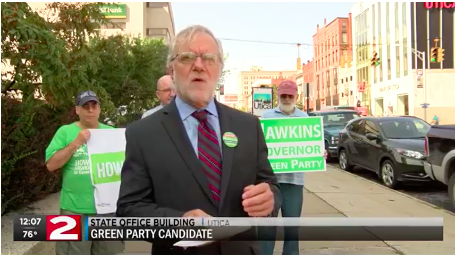 Hawkins, who is from Syracuse, says he identifies with Rust Belt cities like Utica. On Thursday he discussed his Green New Deal, similar to the old New Deal that provided jobs and public services like healthcare. Hawkins’ Green New Deal would begin with transitioning to 100 percent clean energy by 2030.

Hawkins also talked about the unprecedented wildfires around the world and the need to conserve energy. He called out Gov. Andrew Cuomo for what he says are connections to the Buffalo Billion project.

“It’s hard to believe he didn't know what was going on, in terms of the people that got the Buffalo Billion contracts or Joe Percoco running a campaign just down the hall from Cuomo in his office down in New York City,” Hawkins said. “So, we want an alternative that treats everybody the same, not special favors and campaign contributors, and invest that money.”