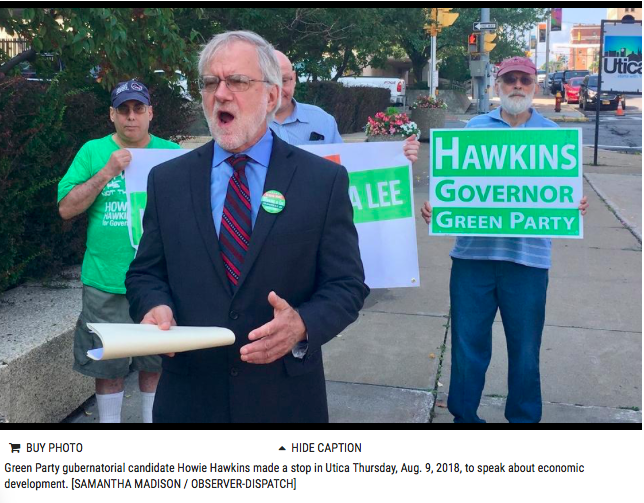 Wages are stagnant, rent is through the roof, health care costs are increasing and the cost of living is going up in general, he said during a news conference in front of the State Office Building in Utica.

“We’ve spent billions of dollars on economic development, but it’s all about tax cuts and subsidies for the very rich corporations,” said Hawkins, who is from Syracuse. “We’ve been doing this for 40 years, it’s just that (Gov. Andrew) Cuomo’s taken it to another level. The theory is it will trickle down to the working class, and it hasn’t.”

The proposed deal would require a transition to 100 percent clean energy by 2030, he said. It also would target public investments directly into the energy, housing, transportation and water and sewage infrastructure in upstate, Hawkins said.

It would lower the costs of doing business by lowering energy, health care, broadband and property tax costs, he said.

“This is like the old New Deal that provided jobs and public services, like housing and schools and wanted to provided health care,” Hawkins said. “One-hundred percent clean energy is necessary so we have climate stability, but it’s also the way to get our economy going.”

During the news conference, Hawkins also spoke about the need to go to a single-payer health care system, going to public power instead of private companies, public banking systems that can lower the cost of financing infrastructure.

“These kinds of things will lower the cost of doing business so it’s even across the board,” Hawkins said. “We want an alternative that treats everybody the same. ... We’ve got to restore higher rates of taxes on the very rich — the top 1 percent in the state, their share has grown from 12 percent in 1980 to 30 percent today and yet their rates have been lowered.”