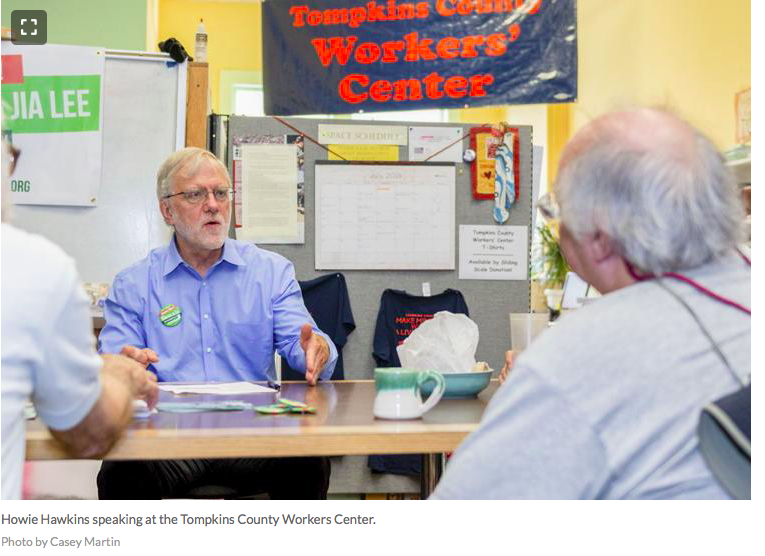 Howie Hawkins – perennial candidate for any and every office worth running for, a long-time activist for numerous liberal causes, and the only noted socialist running for the state’s top post this year – simply wants more credit.

The Green Party’s three-time candidate for Governor of New York State says he has, in recent years, done more to promote the cause of socialism and green energy policies in New York State than any other candidate. Behind policy positions such as a complete shift to clean energy, guaranteed health care for all New York State residents, publicly-financed elections and statewide rent controls, Hawkins speaks of the status quo of New York State with disdain. He preaches the gospel of tax reform and conscientious spending coherently enough that – as a third-party candidate in 2014 – he managed to rally 5 percent of New York voters around the idea that socialism, when applied to the third-largest state in the union by total GDP, is a winning-model: a number significant enough that has led Hawkins to believe he’d pulled Cuomo to the left, in order to garner a share of the Green Party vote.

Understandably, when visiting the Ithaca Times offices on Friday, he seemed a little upset when the New York Chapter of the Democratic Socialists of America – its membership up significantly in the wake of upstart socialist candidates like Alexandria Ocasio-Cortez this year – announced it would be endorsing actress and Democratic Gubernatorial Primary candidate Cynthia Nixon over him in the governor’s race this year.

It could be, in part, because of star power and their lack of ability gaming the New York City media. He’s been to all the right events – hunger-striking with NYCHA tenants earlier this year against gentrification, on-the-ground at the foundation-laying spectacle that kicked off the movement known as Occupy Wall Street – yet, despite highly crafted positions tested over decades and his own perceived impacts on the policies of the mighty Democratic incumbent, Governor Andrew Cuomo, he has gained little traction amongst a mainstream press otherwise enamored with progressive and socialist-friendly candidates. “Socialism is no longer a dirty word in America,” The Guardian newspaper declared a week ago and, two years after the candidacy of Senator Bernie Sanders for President, thousands of Americans – particularly millenials – have begun researching in-earnest exactly what the ideology means to them.

In response to spikes in search engine traffic, explainers have been written on exactly what the word means. Yet, as the conversation has picked up around the topic, Hawkins – a long-time member of renowned Socialist activist group Solidarity – feels slighted in this year’s political cycle, particularly as the issues he has championed for years have become more mainstream.

“My take is she’s a movie star,” he said of Nixon. “[The media] is looking for a reality show to sell ads, get clicks. I think Cuomo’s moved more progressive because we got 5 percent of the vote last time, and he wants to go for president, and needs to compete for the Green vote. The ban on fracking has been a central demand of ours since 2010, the movement toward a $15 minimum wage, tuition-free higher education, paid family leave, criminal justice reform. He has moved our way, at least rhetorically. Nixon means he has to keep doing that. But he was already doing that.”

Apart from several visits to Albany and New York City, Hawkins has focused most of his efforts on Upstate New York. He’s visited Ithaca twice this year, Binghamton and Rochester several times each, and on Sunday made an appearance on a Syracuse-based news station – his hometown, and the place he’s ran for mayor 21 times – for an interview. Then again, the Green Party – with a long track of unabashed progressivism – has always stepped to its own drum. They’ve avoided New York City, spending more time among the working class upstate – and have put together a ticket of their own for all posts available: Lieutenant Governor (long-time NYC school teacher Jia Lee), Comptroller (Mark Dunlea, a climate activist and former Executive Director of the Hunger Action of New York State) and Michael Sussman, running for Attorney General.

“It’s always been surprising,” Dunlea, who attended a Friday afternoon meeting at the Tompkins County Worker’s Center alongside Hawkins, added. “The Green Party has always polled better outside of New York City than it does there. We usually do better in more Upstate areas, probably because of the great media coverage we get here. It penetrates. They’re much more aware of us here.”

Their positions, both Hawkins and Dunlea say, are not new, nor are they unpopular. The pair throws out more information than a standard wonk can handle, throwing out conceptual ideas of what government should be – with research – to back them up. Cut to size, however, their stances are quite simple. They want more transparency out of New York State Government, and more than what they see as lip service by the Cuomo administration toward renewable energy, and named policies around transitioning workers off of dirty energy jobs similar to what Dunlea called a “superfund for workers” as a means to make that happen. The ultimate goal? Reaching 100 percent renewable energy production by 2030 and making a step toward a complete divestment from fossil fuels – part of a larger plan of the party’s known as the “Green New Deal,” a central tenet of Green Party policy which, through moving away from regressive tax models they say grow income inequality, would raise massive amounts of revenue that would then, be reinvested in large-scale, sustainable infrastructure projects.

“We’re way behind other states, like California and Massachusetts,” Dunlea said. “We need to speed it up.”

The party also wants to make a push toward real tax reform at the state level – raising income taxes on the wealthy, lowering property taxes overall while instituting a land value tax in New York State (a tax on the value of unimproved land) to offset the property tax cap, carbon taxes and creating a public bank, similar to that used in North Dakota. Dunlea also offered ideas including the re-focusing on old policies such as small taxes on individual trades on the New York Stock Exchange, which Dunlea believes in the age of computerized trading could result in billions of dollars in new revenues for New York State.

They’re not done there: They want an expansion of public housing in New York State at human scale (distributed evenly between cities and suburbs and built sustainably), substantial reforms to the financing of public education and desegregation of schools between the inner cities and the suburbs, the decriminalization of all drugs along the lines of the Portuguese national drug policy model, and what he characterized as reasonable gun regulations, i.e. the banning of all assault-style weapons, except rifles, sidearms and shotguns. A $15 minimum wage – or $20 by 2020 – is another goal of Hawkins’, which he said could be paid for by saving businesses money in “other ways.”

“We want to lower health care costs through a single-payer health system, lower taxes through reforms that will lower property taxes, a public energy system… we want to lower the cost of living of doing business,” Hawkins said.

With a $15 minimum wage already scheduled for all firms with 11 or more employees this year in New York City – less elsewhere – is it too ambitious a goal to introduce all the prerequisite reforms needed to create the friendly business climate, and then increase wages by $5 or more per hour within two years?

“Yeah, I think so,” Hawkins said. “Two years is plenty of time.”