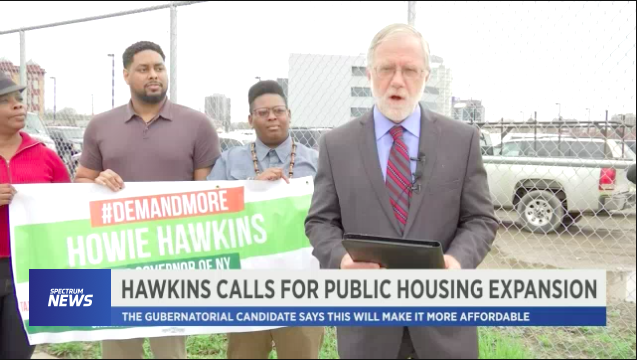 He made this push in front of a former public housing site in Syracuse. Kennedy Square was demolished a few years ago.

Hawkins said that is an example what's wrong, including pay-to-play corruption.

"No affordable housing has been built since this project was torn down in 2013,” said Hawkins. “But across the street back there, there's high end apartments going up for the Syracuse community. Rent starts at $1,400 and go up to $2,500 a month. Those are not affordable to the working class people of Syracuse."

Hawkins was one of 55 protestors arrested on April 23rd during the "Cuomo Walk the Talk" protest in Albany.

The protest was calling for Cuomo to support 100% clean energy as soon as possible, a ban on new fracked gas and fossil fuel infrastructure, and a state carbon tax.

Democratic candidate, Cynthia Nixon also took part in the protest, but was not arrested.

Hawkins was in court Monday. His disorderly conduct case will be thrown out as long as he doesn't get arrested again within six months.