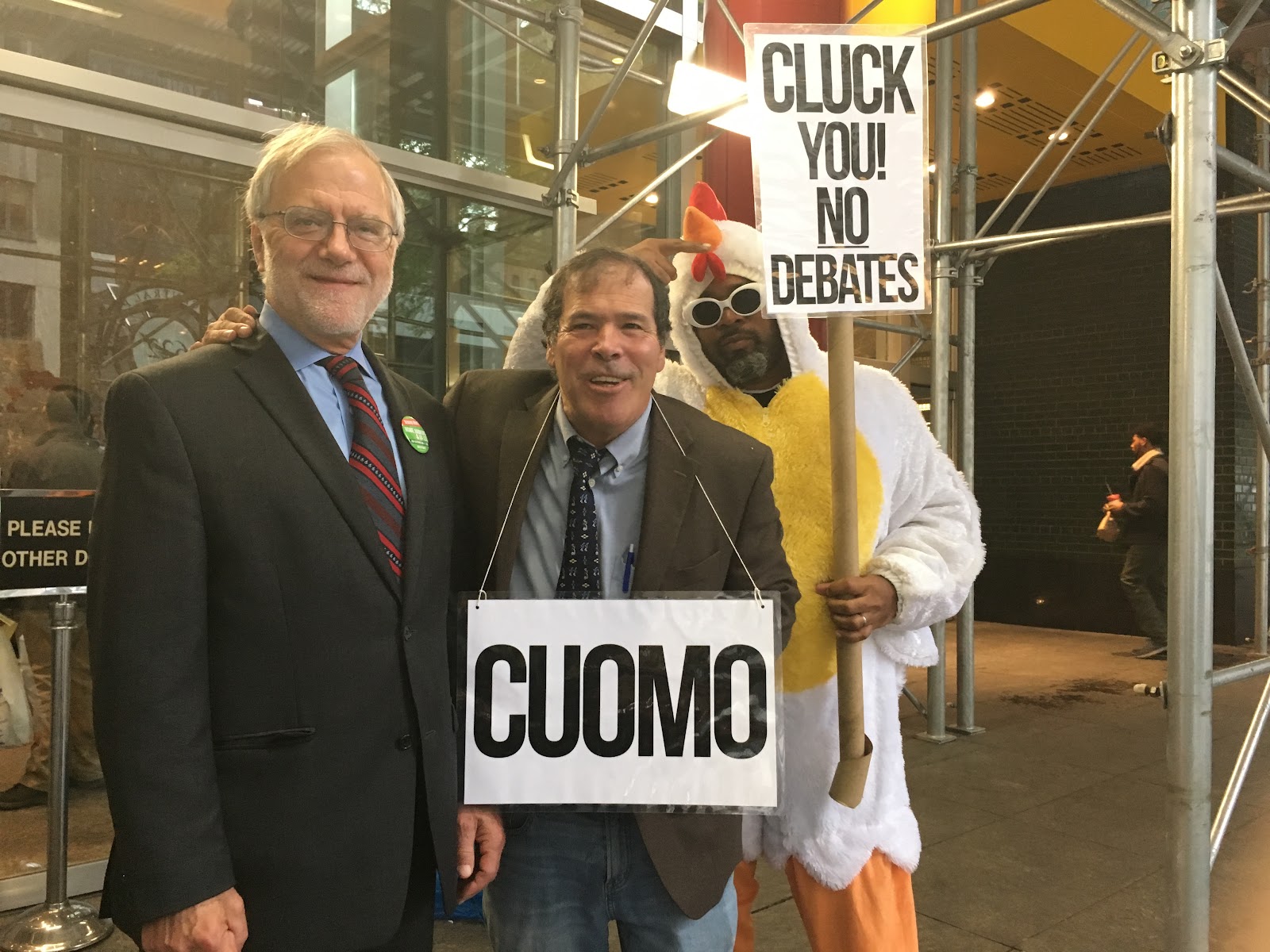 The “Real Cuomo” then appeared, played by Randy Credico, to explain why he wants to campaign against Trump instead of for New York governor. Credico, impersonating Cuomo’s distinctive style of speech and mannerisms, complained of the many Cuomo failures he didn’t want exposed in debates, from public corruption and campaign financing to the broken subway system and sky-high rents.

Governor Andrew Cuomo has so far not agreed to any debates with his general election opponents.

Hawkins called upon media, civic, and educational organizations to form a New York Debate Commission like the state debate commissions in Indiana, Ohio, Utah, and Washington State.  Hawkins said that the media should agree to televise debates regardless of whether Cuomo shows up.

“It’s time for the people to take the debates back from corporate-endowed incumbents like Cuomo. Democracy suffers when incumbents hide their positions from the media and public and instead rely on massive donations from special interests to blanket the air-waves with promotional ads,” said Hawkins.

Hawkins raised as many donations as Cuomo during the last election cycle, when he got 5% of the vote. Cuomo’s donations however were on average 100 times as large as Hawkins’.

Hawkins has been calling since the primary concluded on September 13 for four debates in four cities on four topics: The Economy, Government Reform, Climate and the Environment, and Social Problems, including housing, health care, subways, criminal justice, and civil rights. He says all ballot-qualified candidates should be invited to the debates.

He has urged media and civic organizations to organize the debates with or without Cuomo. “Cuomo should not be permitted to once again dictate the time, place, and format of debates — or no debates,” Hawkins said

Hawkins, a retired Teamster from Syracuse who finished 3rd in the 2014 race with 5% of the vote, will confront the chicken-suited Cuomo character again tonight in Rockville Center. They will debate at the corner of N. Park Ave. and Front St. in Rockville Center between 6:00 and 7:00 pm, across the street from a fundraiser for Sen. Todd Kaminsky where Gov. Cuomo is the featured speaker. The fundraiser starts at 6:30 pm.

Hawkins will speak on the issues in the governor’s race that evening at 7:30 PM, Freeport Memorial Library, 144 W Merrick Road in Freeport.