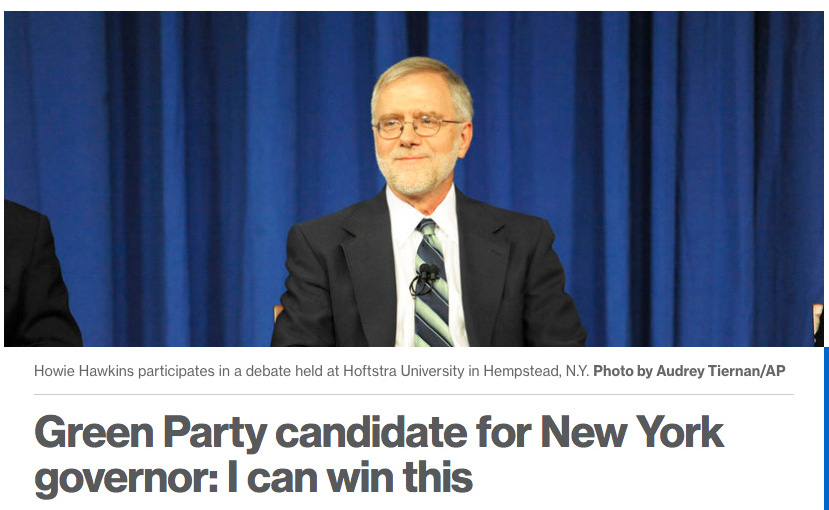 Green Party candidate for New York governor: I can win this

The 2014 New York governor’s race is not Howie Hawkins’ first dance. Hawkins, the Green Party’s gubernatorial nominee and a long-time UPS truck unloader, is a perennial candidate for public office, having logged six unsuccessful races in just eight years. This time, though, is different.

Politics to the left of the Democratic Party is having a miniature resurgence across the country. Recent polling shows that young people between the ages of 18 and 29 have a slightly more positive view of “socialism” than “capitalism.” For the first time in at least a century, a socialist is holding citywide office in Seattle, Wash. One of the summer’s hottest bestsellers is a treatise on wealth inequality written by a leftist French economist. And in New York – where Bill de Blasio recently seized control of the largest city in the country by running on an anti-inequality platform – Hawkins is betting that widespread dissatisfaction with Gov. Cuomo will give his ticket a fighting chance.

The incumbent governor and rumored presidential candidate has been a deeply polarizing figure in New York politics. Although he’s courted progressive adoration through a series of big-ticket achievements like the passage of New York’s 2011 marriage equality law, he’s also cut taxes for the wealthy and abandoned the liberal push for public financing of elections. His economically conservative policies have earned him the moniker “Governor 1%” from disaffected leftists.

New Yorkers are hungry for an alternative to Cuomo, says Hawkins, who points to an April 2014 poll in which a generic nominee from the left-leaning Working Families Party (WFP)commanded 24% to Cuomo’s 39%.

“I think we’re the ticket that 24% is looking for,” Hawkins told msnbc. “They just haven’t found us yet. When they find us, we’ve got a real race.”

Of course, Hawkins isn’t the WFP nominee; Cuomo is. The Democratic governor received WFP’s official blessing at the party’s convention on May 31, although it didn’t come without a fight. Fordham University law professor Zephyr Teachout challenged Cuomo for the nomination, positioning herself as the true left-wing candidate in the race. But WFP ultimately sided with Cuomo after Mayor de Blasio helped broker a deal between them. Teachout has since announced her intention to run against Cuomo in the Democratic primary.

The moment Cuomo sealed the WFP nomination; Hawkins’ campaign had a statement ready. Hawkins, already trying to court the left-wing anti-Cuomo vote away from the Working Families Party, described it as “a tool of the Democrats and their corporate sponsors to confuse voters into supporting the agenda of the 1%.”

“We feel their pain over the Cuomo nomination,” he said of left-wing WFP members. “We are here for them. We give them a place to organize and vote against the Cuomo agenda and for progressive policies.”

Speaking to msnbc three weeks later, Hawkins rejected the notion that he and Teachout were somehow in opposition to one another. Rather than splitting the left-wing vote, he feels that a Teachout primary challenge will help the Green Party cause.

“I hope she beats Cuomo,” he said. “Then we’ll have an argument about how far to the left we want to go. She can help expose Cuomo’s record, that’s fine.”

Although Hawkins and Teachout both hope to capitalize on left-wing anti-Cuomo sentiment in the state of New York, their campaigns represent two very different styles of left-wing politics. Teachout is a veteran of the 2004 Howard Dean presidential race and some of a guru to the Democratic Party’s progressive netroots. Hawkins, when he’s not running for some public office or another, is a blue collar unionist and unreconstructed socialist. His running mate, Brian Jones, is a former public school teacher. Whereas Teachout’s campaign embodies the spirit of the 2006 Democratic primary wave in many ways, Hawkins and Jones lay a greater claim to the legacy of Occupy Wall Street.

“My vision, and many people on the left’s vision, is to use political campaigns, issue campaigns, to build a massive online base with lots of small donors, lots of volunteers, and small groups of people all around the state,” said Teachout in an interview with msnbc earlier this month. That vision may help the left build power within the structures and institutions of the campaign cycle, but Hawkins and Jones hope to rattle those structures from the outside. To them, electoral success will only come with the creation of a vibrant left-wing social movement outside the realm of electoral politics.

“The second party of business, the Democrats, is really clever about co-opting and assimilating our movements and bringing them into their fold,” said Jones. “And they do that through non-profits, and they do that through the labor movement. But that’s been the pattern, is that whenever our movements get any real headway, they get brought in from the cold to the Democratic Party. And people see that as access to power, but it ends up being co-optation by power. And it’s taken the steam out of a lot of our struggles. So the struggle to build an independent third party is connected for genuine political independence anyway, which has always been a challenge in the United States.”

Neither goal may be within reach this election cycle. The most recent Siena poll has Hawkins at 4% among New York voters, and 5% among self-described liberals. Yet Hawkins maintains that something is happening in New York, and people are ready for a genuine left alternative.

“People have gone through some different things and they’ve basically seen they’ve got to be independent and speak for themselves, instead of attach themselves to the latest liberal Democratic hope,” he said.

Quiz: would you ever vote for the Green Party?