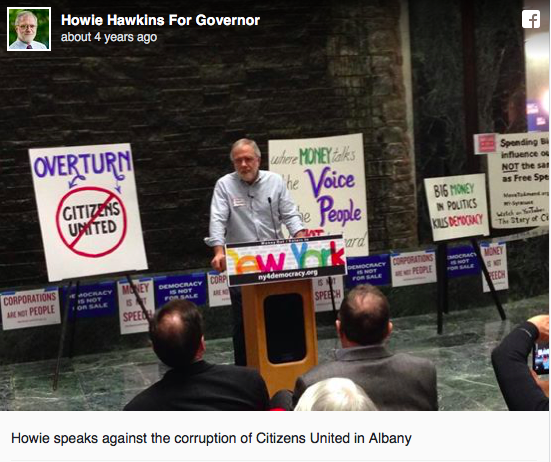 The Green Party wants New York State to transition to clean energy sources by 2030. The party wants every home, and every office in the state to be fitted with generators for solar, wind, wave, and other renewable energy sources. The idea is to wean the state off of fossil fuels within the next twelve years.

Hawkins is also calling for all New Yorker to receive full medical insurance. The Green Party candidate says that New York residents should all have access to primary care doctors as well as a range of specialists. That goes for undocumented immigrants as well, Hawkins says.

And Hawkins wants to overhaul New York’s troubled subway system, offering free or reduced fares and repairing outdated infrastructure. He plans to pay for all of this by taxing taxi, Uber and Lyft services. He also wants to introduce congestion pricing for cars coming into Manhattan at the busiest times of day. You can read more about Hawkins’ policy ideas here.

2. Hawkins Was a Vietnam War Protester & Also a Marine

Hawkins lives in Syracuse, in western New York State. He has run as the Green Party candidate for a range of positions in Syracuse: city council, mayor, and auditor. He’s also been active as a community organizer, serving as the secretary for the Eat To Live Food Cooperative and as the treasurer for the Southside Community Coalition.

From 2011 to 2017, Hawkins worked unloading trucks for UPS. He was a member of the Teamsters Union. He has since retired but still declares himself a supporter of the Teamsters. The New York Times has noted that Hawkins is living near the poverty line; he retired last year and is surviving on pensions that come to just over $1,260 a month. Hawkins told the New York Times that if he doesn’t get elected governor, he’ll probably pick up some holiday shifts working for UPS, where he expects to earn about ten dollars an hour.

4. Hawkins Has Already Run for Governor of New York Twice 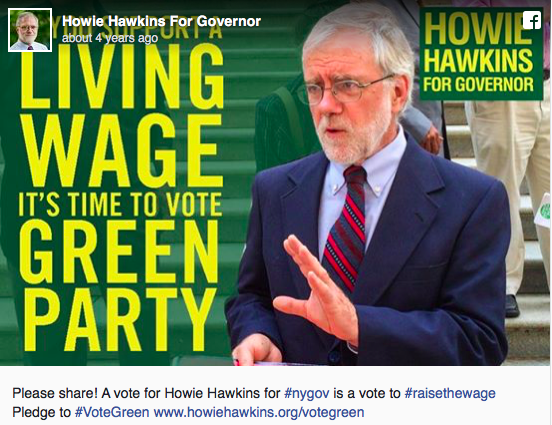 Hawkins was the Green Party candidate for governor of New York in 2010 and in 2014. He won 5 percent of the vote in 2014, which makes him the most successful Green Party candidate in New York State history. Hawkins campaigned on a platform of anti-fracking, clean energy, and healthcare for all. He has been a member of the Socialist Party since 1973.

In total, Hawkins has run 23 times for political office — and he has lost every single one of his races. But he told the New York Times that he isn’t discouraged by his many losses. Hawkins said he’s hoping to shift the way Americans talk about politics. “I think Greens improve elections because we bring issues to the table that otherwise wouldn’t be discussed,” he said.

5. Hawkins Says He’s Been Politically Active Since He Was Twelve Years Old

Hawkins got involved in progressive politics when he was a boy growing up in California. He joined the Peace and Freedom Party at age 12. And by the time he was 14 or 15, he says that he was registering voters and urging them to protest against the Vietnam War. Hawkins himself was an anti-war protester, although he enlisted in the Marine Corps when his draft number came up. He never saw active duty.

Hawkins said that his parents were “Midwestern Republicans” and has described their political beliefs as: “Stay out of stupid foreign wars, watch the public money, civil rights, and otherwise leave us alone.”

Hawkins moved to Syracuse in 1991 and joined the Syracuse Green Party. In 1993, he had his first run for political office, as a candidate for Councilor at Large in the City Council. Since then, he has been a candidate in 23 elections and has lost them all.