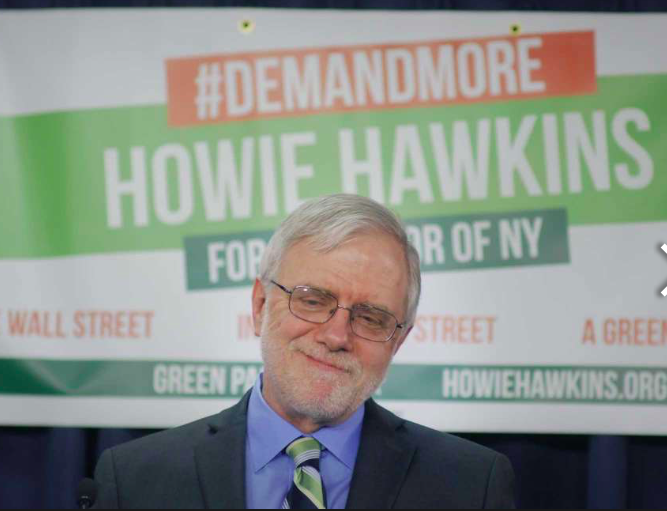 ALBANY - Ballots in New York are getting a shakeup.

As a result of last week's elections, the state's third-party landscape is shifting, with two new parties recognized, two recent creations put on life support and ballots getting reorganized.

Libertarian Larry Sharpe's 90,816 votes for governor put him more than 3 million votes behind Democrat Andrew Cuomo, yet he easily surpassed the 50,000 vote threshold needed for his party to earn a spot on the ballot for the next four years. Also bringing home the Election Day consolation prize for the first time was Stephanie Miner, who collected 51,367 votes for the Serve America Movement Party.

They join the ranks of the Democratic, Republican, Conservative, Working Families, Green and Independence parties, as recognized political parties in New York. The designation means they can nominate candidates for statewide offices without collecting signatures from voters, and have a lower threshold for fielding legislative candidates.

Jim Rosenbeck, chair of the Libertarian Party in New York, is looking forward to his party appearing on voter registration forms starting in January. He estimated about 8,000 New Yorkers are currently enrolled in the party.

"It will no longer be a mystery how to register as a Libertarian," Rosenbeck said.

Looking to the future, he is realistic about their election opportunities, and wants the party to build a foundation at the local government level.

"It would be foolish to think we're going to compete in state legislative races in the next few years," he said. "We have to earn the trust of the people in New York, and that starts in their communities."

The roadmap forward for the Serve America Movement is unclear, as it only has roots going back a few months and a vague mission of working for a "new American majority." Miner said in a statement following her loss, "There's no doubt we will continue the conversation about better politics and better results."

The recognized status for third parties could also makes them susceptible to being co-opted by the Democratic and Republican parties, as New York allows for cross endorsements, which often result in minor parties nominating major party candidates.

This year, the Working Families Party bumped Cynthia Nixon from their gubernatorial line to support Gov. Andrew M. Cuomo after he won the Democratic primary. On the back of the governor's 106,008 votes on their line, they were able to move up one position to fourth on the ballot.

Rosenbeck hopes the Libertarian Party can avoid this temptation the same way the Green Party has, and expressed his opposition to becoming the "Republican-lite" party.

In contrast, Conservative Party Chair Mike Long anticipates his organization will continue to back GOP candidates when appropriate. "One size doesn't fit all," he said.

The far-right party will continue to have the coveted third spot on the ballot, as Republican Marc Molinaro racked up 238,578 votes on their line.

For the Working Families Party, Election Day was a realization of their prolonged effort to flip control of the state Senate. Party co-chair Karen Scharff says they're no focused on making sure the state Legislature delivers on the progressive policies they campaigned on.

Based on the seven Democratic senators the Working Families Party helped unseat in September primaries, Scharff is optimistic about their ability to influence local elections in the same way. She anticipates the party won't deviate from its strategy of backing progressive candidates in Democratic primaries and then generally throwing their support behind Democratic nominees.

Order is based on the Election Day results in the race for governor.

The final tally from Election Day was especially disappointing for the four-year-old Women's Equality and Reform parties, which each were about halfway short of the minimum threshold and will have to earn their ballot status four years from now.

Created in 2014 by Cuomo, largely as a response to a Democratic primary from Zephyr Teachout, the Women's Equality Party hasn't had much of a footprint in New York politics. The same could be said of the Reform Party, which was originally launched as the Stop Common Core Party by then-GOP gubernatorial nominee Rob Astorino.

Reform Party Chair Curtis Sliwa said the fate of the party will be decided after the holiday season. His hope is that they mount a comeback, and develop their own bench of candidates instead of backing major party candidates.

But Sliwa acknowledged there is the possibility they "scatter into the wind and everyone goes their own way."