When Howie Hawkins ran for governor in 2010, his fledgling Green Party scored a significant milestone by netting enough votes to qualify for “permanent” ballot status – barely.

Now Hawkins is scoring as high as 9 percent in some polls, and the longtime Syracuse activist is hoping this year’s candidacy will further cement his Greens as a force in state politics. He acknowledges the “long odds” of beating either Democrat Andrew M. Cuomo or Republican Rob Astorino, but looks for his party to soon have a seat at New York’s political table.

Hawkins demands to be included in all debates

Hawkins, who placed third in the 2010 race, said Cuomo's suggested debate lineup shows he wants to exclude the Green Party from the New York City debate because he may be vulnerable there to a challenge from the left. He said Cuomo is including the third parties in the Buffalo debate to diminish Astorino's chances in more conservative western New York.

"I don't think it's right," Hawkins told The Associated Press. "By any reasonable standard I should be included (in all the debates). The people have a right to hear from all of us. This should be about more than tactics."

Green Party candidate for Governor of New York State Howie Hawkins brought an "out of the box" style of looking at public policy issues to the streets of Alfred Sunday.

In addition to Alfred, Hawkins made campaign stops Sunday at Pollywogg Holler in Phillips Creek and a private residence in Hinsdale. In Alfred, Hawkins spoke to about a dozen people. 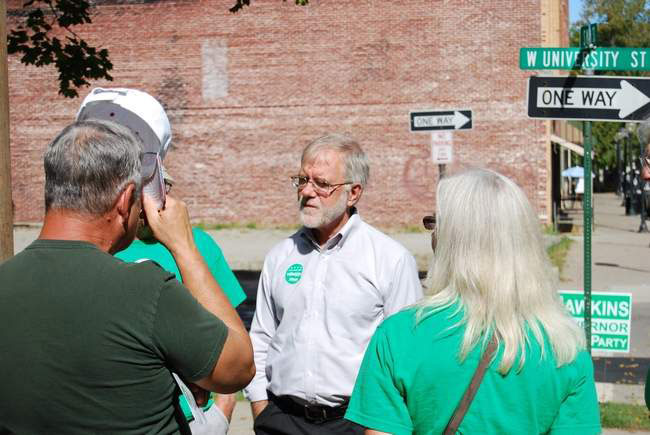 Cuomo would get 56 percent of the vote, Astorino 27 percent, Hawkins 7 percent and 10 percent are still undecided. In August, it was 58-26-6 for Cuomo, Astorino and Hawkins.