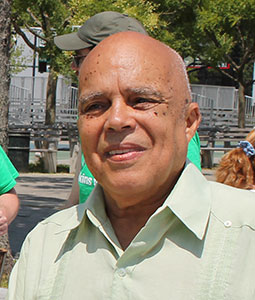 I am sad to report Ramon Jimenez died on May 1, 2016. I got to know Ramon when he was the Freedom Party candidate for Attorney General in 2010. I was honored when he agreed to run for Attorney General on our Green Party slate in 2014. He was a great candidate because he was so right and so righteous on the issues and drew on his long experience fighting for justice in the South Bronx where he practiced law and politics. I was humbled because he had recently received his stage 4 prostate cancer diagnosis. But he stepped up to run anyway. That just exemplified how he lived his life. Campaigning with him around the Bronx, on TV interviews and at news conferences, and at the People's Climate March are the days I will remember most from the 2014 campaign. The New York Times obituary for Ramon, "A Voice for the Bronx’s Powerless Falls Silent," gives a fuller sense of Ramon's many contributions. We will miss Ramon and do our best to carry his example forward.

Ramon Jimenez is a longtime Bronx based lawyer, community activist and writer. For more than 30 years, he’s represented low income families, injured workers and various community groups in the poorest Congressional District and urban county in the U.S.

Ramon, who was born in Brooklyn, was raised there and in East Elmhurst Queens, and then moved with his family to the Bronx where he still resides. He earned his law degree from Harvard School of Law in 1974. As a professor at Hostos Community College in the Bronx in 1976, Ramon led students, faculty members and others in a demonstration and occupation of the college in protest of plans to shut the school or merge it with another college. The occupation lasted 20 days, ending with the arrest of 40 of the protestors including Ramon. The protest was successful and Hostos saved.

In the ’80s, Ramon served as an administrative law judge for the State Workers Compensation Board but soon resigned over the politics and heavy caseload. He criticized the Board’s Chair over what he called “fast-food justice.”

Ramon is an outspoken critic of the Bronx Democratic Party machine, and has been at the forefront of exposing and fighting the “corruption, cronyism and nepotism” that is endemic within the system. He’s also working to expose and prosecute white-collar crimes, and seeks an end to discriminatory and failed police policies such as “broken windows” and stop and frisk.

Mirroring Sotomayor, for a While at Least

Their lives were once on parallel tracks, but have long since gone in different directions.

Both are children of working-class Puerto Rican parents. Judge Sotomayor, 55, graduated from Yale Law School in 1979; Mr. Jimenez, 60, graduated from Harvard Law School in 1974. Judge Sotomayor, a Bronx-born federal appeals court judge, is on the verge of becoming the third woman and the first Hispanic judge to sit on the United States Supreme Court; Mr. Jimenez is a Brooklyn-born lawyer whose Bronx office is upstairs from a bar near the corner of East 149th Street and the Grand Concourse.

For more than 30 years, Mr. Jimenez has been a South Bronx litigator and agitator, representing low-income families, injured workers, community groups and others in the poorest Congressional district in the country. Many of the cases he takes on pro bono. In recent years, he has earned about $40,000 a year.

Mr. Jimenez has been an outspoken critic of Bronx Democratic political leaders. He has sued the city, federal housing officials, landlords and labor leaders. On Tuesday, as Judge Sotomayor answered questions from senators about her "wise Latina" comment, the right to bear arms and the 14th Amendment, Mr. Jimenez was preparing for a meeting later in the evening with black and Latino workers at Woodlawn Cemetery who say they are being discriminated against.

"I feel a pride watching her," Mr. Jimenez said as he sat at the reception area in his office watching the hearings. "I think we took different directions in life, but I certainly feel a kinship. When you think about how many Puerto Ricans were in Ivy League law schools in the '70s, you have to feel a kinship."

Mr. Jimenez keeps his law degree, written in Latin, in a frame near the door of his office, which is decorated with Puerto Rican flags and photos and paintings of Roberto Clemente and Pedro Albizu Campos, the revolutionary, Harvard-educated Puerto Rican nationalist leader. Many of Mr. Jimenez's clients do not even notice the degree.

Mr. Jimenez did not attend his Harvard graduation. "My best friend was a $9.95 Greyhound bus to New York City," said Mr. Jimenez, a copy of "American Radical: The Life and Times of I.F. Stone" on the desk in front of him. "I just felt so isolated at Harvard and I felt such elitism that I didn't feel comfortable going or having my parents go."

Mr. Jimenez was raised in Brooklyn and East Elmhurst, Queens. His mother worked in sweatshops from age 18 to 64, sewing zippers on dresses. He used to skip school and follow her to work, an experience that continues to inspire him today. His mother died a few years ago at 72.

"I have women here who work seven days a week, 12 hours a day and get paid $250 a week," Mr. Jimenez said. "Little people, the working people, come through the door over here, and they remind me of my mother."

Conservative critics have accused Judge Sotomayor of being a "judicial activist." Mr. Jimenez has been an unabashed municipal activist.

As a young professor at Hostos Community College in the mid-1970s, he led a coalition of students, faculty members and others opposed to plans to shut the school or merge it with another college during the city's fiscal crisis. The college is part of the City University of New York system. Protesters marched and demonstrated and, in March 1976, took over the college, holding classes while locking out the administration. The office of the Hostos president became a day care center for students with children.

It was a 20-day occupation, and it ended with the arrests of 40 people, including Mr. Jimenez. "We had the longest takeover in the history of the City University of New York," he said. "I slept in Room 406 for 20 days."

The college was ultimately saved. Mr. Jimenez's office is across the street from the campus.

In 1979, the year Judge Sotomayor graduated from Yale and began working as a prosecutor in the Manhattan district attorney's office, Mr. Jimenez was the focus of an inquiry by the grievance committee of the New York City Bar Association. Mr. Jimenez and another lawyer, Rafael Andaluz, who had opposed budget cuts planned at the time that would close hospitals and schools, issued a mock subpoena to Mayor Edward I. Koch, requesting that he answer charges of violating the civil rights of Latinos, blacks and "other poor people of the Bronx."

The committee took no action. "This was symbolic, First Amendment speech, and Koch took it personally," Mr. Jimenez said.

In the early 1980s, Mr. Jimenez was an administrative law judge for the State Workers' Compensation Board, a position he could have used to advance his career, perhaps to become a state or federal judge. But he disliked the politics and the caseload that came with the job, referring to the 90-case-a-day workload as "fast-food justice" and criticizing the compensation board's chairman, and he later resigned.

The phone rang as the hearings continued. It was a tenant who had been injured after part of the ceiling in her South Bronx apartment caved in on her. The discussion in Washington faded into the background.