— Green Party gubernatorial candidate Howie Hawkins, who also attended the rally, says the Green Party wants to get off fossil fuels 20 years earlier than Nixon does, by 2030. "That's what the science says we need to avert catastrophic climate change," Hawkins told public radio's Karen Dewitt. "That's what we need to do in industrial states like New York." Read more here.

— Some activists were arrested in a planned civil disobedience action and Hawkins was among those arrested.

Hundreds of protestors gathered at the state Capitol yesterday to pressure Cuomo on climate change - a day after Earth Day.

Some, including Green Party gubernatorial candidate Howie Hawkins, were arrested inside for civil disobedience, while outside, the crowd was joined by Cuomo's Democratic primary challenger, actress and activist Cynthia Nixon.

Howie Hawkins called Governor Cuomo’s plastic bag ban proposal yesterday a publicity stunt designed to divert attention from thousands of climate change activists at the Capitol on Monday saying it was time for Cuomo to Walk the Talk.

Hawkins was one of 55 climate activists arrested out of the Governor’s office. Hawkins supports legislation to require NYS to go to 100% clean energy (not just electricity) by 2030; a ban on new fossil fuel infrastructure (including revoking the CPV permit in Orange County); and a robust carbon tax.

Hawkins supports a statewide plastic bag ban similar to California coupled with a fee on paper bags, as Sen. Liz Krueger has already introduced. Without such a fee, consumers just change to paper bags which have their own environmental problems. Cuomo also proposes to exempt restaurants from the ban.

“Cuomo’s wastes too much time greenwashing. The real problem is that he blocked the NYC plastic bag law that the Brooklyn Green Party helped passed. And while he likes to proclaim himself as a national leader on climate change, he is flooding the state with imported fracked gas, giving billions of dollars to old nukes, and is getting only 3 to 4% of the state’s electricity from renewables,” noted Hawkins.

Two of Gov. Andrew Cuomo’s political opponents were at an Earth Day rally on climate change attended by hundreds at the state Capitol Monday, where they said the governor’s energy policies are far from adequate.
Read more
Posted April 23, 2018 6:00 PM
Share
Add your reaction 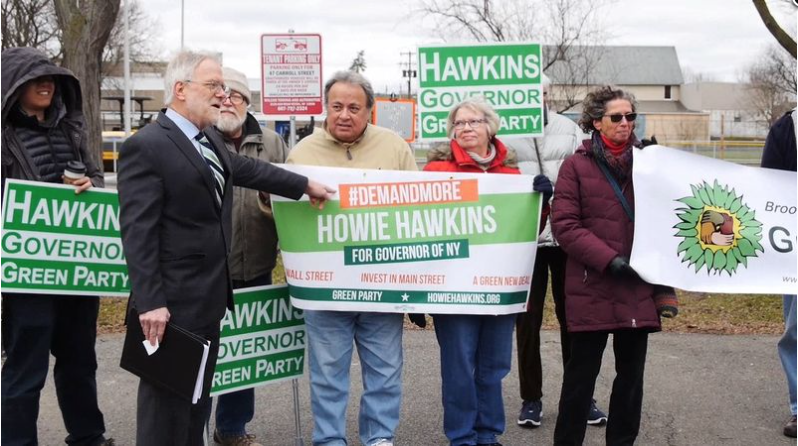 Howie Hawkins of Syracuse visited Binghamton and Ithaca today to announce that he is running for Governor to demand more progressive reforms and system change. Hawkins finished 3rd in the 2014 Gubernatorial race. His 184,419 votes moved the Green Party up to the 4th line among ballot qualified parties.

In his local stops, Hawkins emphasized the need for the state to better share revenues with local government, enabling them to better meet local needs while reducing regressive local property taxes.

Hawkins also said for Earth Day that New York should commit to 100% clean energy by 2030, stop all new fossil fuel infrastructure and enact a carbon tax. Studies show that moving to 100% clean energy would create hundreds of thousands of new jobs in the state. Nationwide there are already 5 times as many jobs in energy efficiency and renewable energy than in energy efficiency. He wants New York to require all new cars to be fossil free by 2025, and to promote renewable heating and cooling of buildings with air-source and ground-source heat pumps.. Hawkins said he will be participating in the large climate change protests at the State Capitol on Monday April 23.