Green Party nominee Howie Hawkins, who placed third in the 2016 election, called Cuomo “cowardly” for refusing to debate. He held a mock debate earlier this week with a man dressed as a chicken to make his point.

“Democracy suffers when incumbents hide their positions from the media and public and instead rely on massive donations from special interests to blanket the air-waves with promotional ads,” Hawkins said....

Guest Post: Howie - A fighter for Justice. And my cats love him.

Mentor.  Comrade. Running-mate. Friend.  That is how I know Howie Hawkins.

And I am proud to say my friend and former-running mate in the 2010 gubernatorial race, Howie Hawkins is the Green Party candidate for Governor. 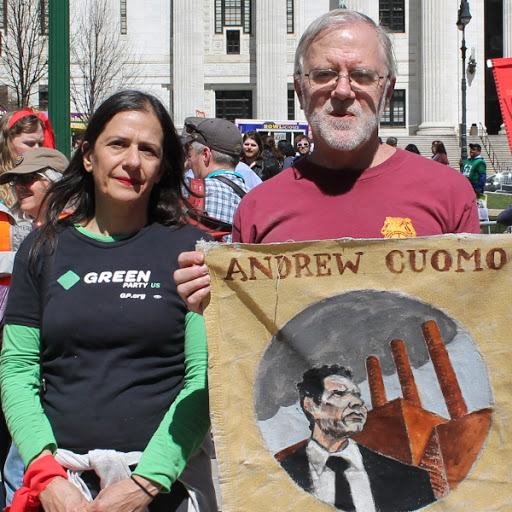 (photo from April 23rd climate rally at State Capitol,
where we were both arrested for protesting Cuomo)

I should point out that we have 4 days before the last filing period for campaign financial reports. We need donations of at least another $5,000 by October 22  to meet our fundraising targets.

Next month, millions of New Yorkers will head to the polls hoping to defeat Republicans and open the door to progressive change in the state. But if we are going to win bold change in Albany, it will require a massive struggle against Governor Andrew Cuomo and his big business backers. That’s why Socialist Alternative urges people to not vote for Cuomo. Instead, we encourage people to register a protest in the election by voting for Howie Hawkins.

As recently as late September, Nixon had been polling at 10 percent as a WFP candidate, so surely Quinnipiac would be interested to see whether Nixon's anti-Cuomo base was grudgingly following the party line, or transferring to Green Party candidate Howie Hawkins (who received 4.8 percent of the vote in 2014), or shifting to the energetic and media-savvy Libertarian Larry Sharpe, or even to independent update pol Stephanie Miner? Nope, respondents were presented with the woefully inaccurate premise that the choice in this overwhelmingly blue state is between the unlovable Cuomo and a largely invisible Republican named Marc Molinaro.

But the point is, independent polling agencies and their media partners who tell you that they're providing accurate nonpartisan analysis of the New York gubernatorial race—and scores of other electoral contests from coast to coast—are flat-out lying. Journalists and political scientiests should be independent checks on power, not handmaidens to it.

Cuomo should agree to debate opponents

But the voters do. And isn’t that what it’s supposed to be about?

It was a week of ducking political foes for two of New York's most powerful politicians, or as one opponent of Governor Andrew Cuomo put it, chickening out.

The Green Party candidate for governor is doing his best to goad Cuomo into a debate before Election Day by staging fake debates with a Cuomo impersonator and a man dressed as a chicken.

With the chicken (played by James Lane, a former Green Party candidate for public advocate) squawking soundbites like “Debates Are Fowl!,” “Read My Beak! No Debates!,” and “Debates? Kiss My Eggs!,” Hawkins instead debates a Fake Cuomo played by Randy Credico.

Hawkins is calling for four debates in four cities on four topics: the economy, government reform, climate and the environment, and social problems.

The Independent Left Must Oppose Islamophobia

Looking Back on an Endorsement Debate

We Can Critically Support Independent Candidates

Questions About Endorsing We Needed To Ask

A missed chance to support a real alternative

What matters in our endorsement debate

On the ISO’s refusal to endorse Howie Hawkin’s campaign

Howie Hawkins for Governor: A Step in the Left Direction

We are the abolitionists of today, standing for the abolition of racism, sexism, and capitalism, for reversing climate change and ending imperialist wars. Through our social movements and our support for socialist and radical progressive candidates in the Democratic Party, we contribute to dividing that party and eventually breaking it up so that its left can become free. At the same time, we must support candidates outside the Democrats who represent our socialist alternative. We need to do both of these at once. And that’s where Howie Hawkins of the Green Party comes in.

Howie Hawkins, for many years a truck driver and Teamsters union member, is an open socialist running for governor against Andrew Cuomo on the Green Party ticket. Howie has run for governor before, winning 5 percent of the vote in 2012, an achievement that maintained the Green Party ballot line. While the Green Party remains a small, progressive party that receives only a small percentage of the vote in national elections, its party platform—focused on the environment, peace, democracy and economic justice—is far to the left of the Democrats. Howie himself, a member of the socialist group Solidarity, stands for the abolition of capitalism and the creation of a democratic socialist society.