The Green Party is poised to make history in New York this November.

I am running for Governor alongside Brian Jones, a dedicated NYC teacher, socialist, and community organizer.

Two months before Election Day, we are astounded and grateful for the outpouring of support coming from friends and voters throughout New York and across the country. 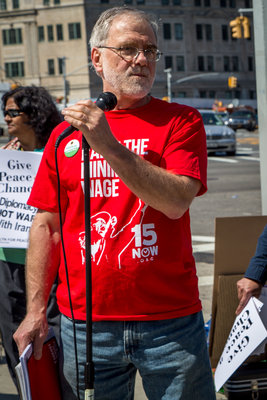 Polls show our ticket pulling 7% of the vote – if we stay at just this level, it would be the highest percentage ever for a progressive third party candidate for Governor in NY.

Other polls indicate that we can go much higher. One poll found that a “more liberal or progressive” Working Families candidate running independently against Gov. Cuomo would receive 24%, equal to the Republican and only 13 points behind the conservative Wall Street Democrat, Andrew Cuomo. Of course, the Working Families Party, the Democrats’ second ballot line, endorsed Cuomo. So we – a working Teamster and a union Teacher – are the ticket that millions of New Yorkers are looking for. (The picture on the left shows Howie speaking at the 15 Now Rally in Brooklyn, NY in May 2014.)

Thanks to individuals like you, we have already raised more money than during our entire 2010 campaign. We have hired media and fundraising staff, put organizers in the field in NYC, Central New York, and in the Capital District, and every day we are flooded with requests for lawn signs and campaign materials.
We need your financial support to keep this campaign going and growing.

The NY Times exposé of Cuomo’s interference with his Moreland Commission has convinced most New Yorkers that Cuomo is a big part of the corruption problem in Albany. 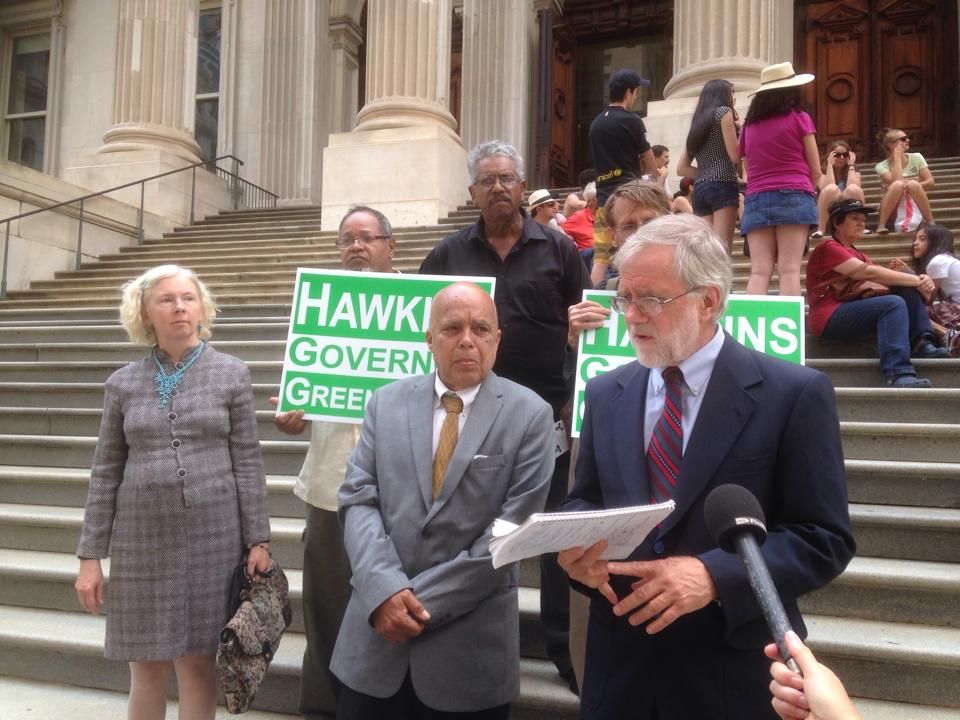 Our 2014 Green Party slate advocates for tougher campaign finance and ethics reforms, and we have never shied away from standing up for what’s right.

Ramon Jimenez, Green candidate for Attorney General, is a Harvard educated people’s lawyer in the Bronx who has been serving the underserved for over 40 years. (The picture to the right shows Howie and Ramon Jimenez, hold a press conference on the Moreland Commission scandal on the steps of Tweed Courthouse in Manhattan in July 2014.)

Theresa Portelli, running for Comptroller, is a tireless fighter for criminal justice reform and child welfare as a community activist, civil servant and former school board member.

My running mate, Lt. Governor candidate Brian Jones, not only organized those parents, students and teachers to challenge the corporate-backed charter school invasion in Harlem – he also galvanized a city-wide movement to take back our public schools from hedge fund profiteers. 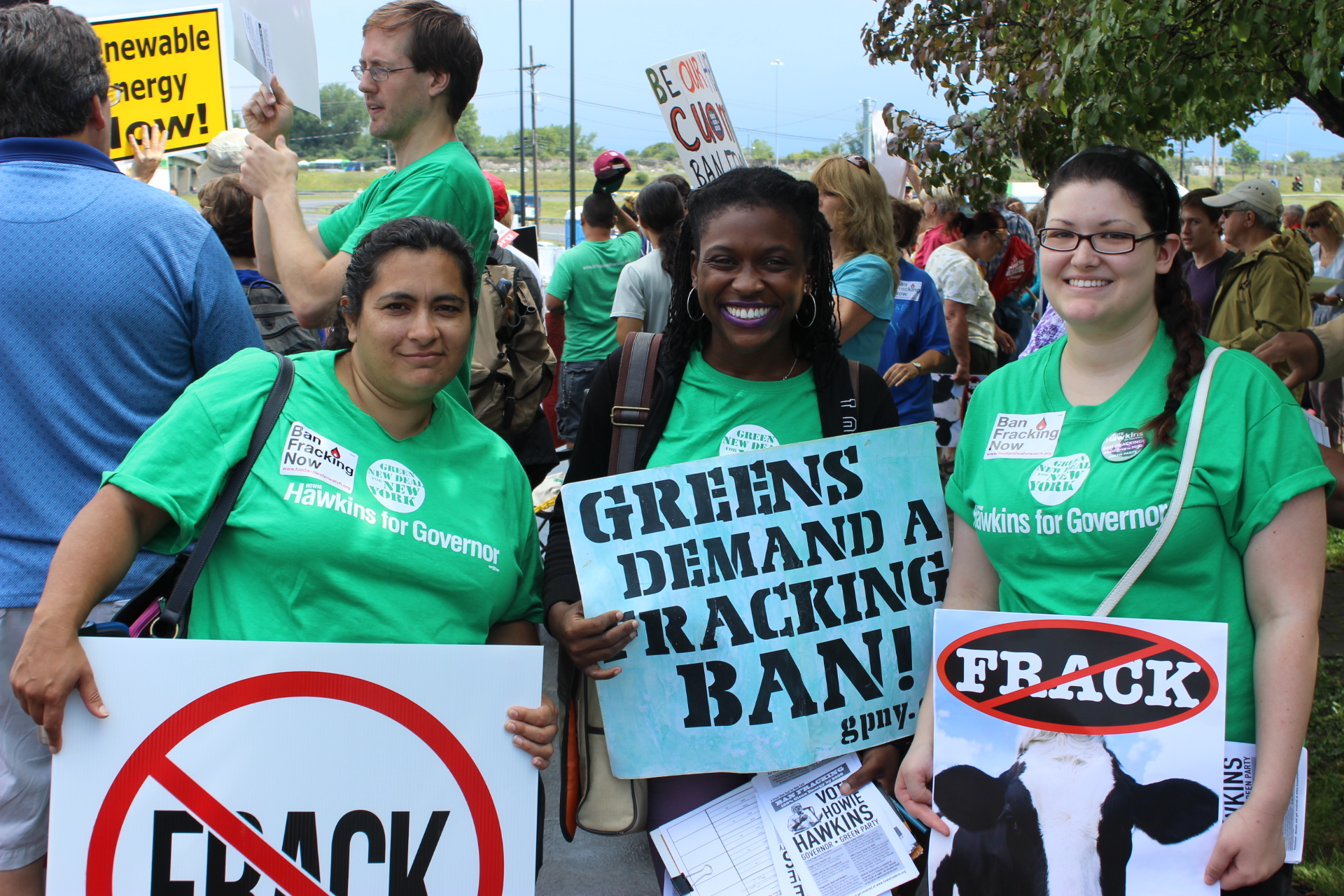 On September 21, the Green Party will be marching with hundreds of thousands in New York City to demand that the US and the world finally take action on global warming. Four years ago, the Green Party and I were out in front, calling for a ban on fracking for natural gas. Today, we are leading the call for NY to go 100% clean renewable energy by 2030 and for New York State to divest pension funds from fossil fuels. (The picture to the left shows groups of Green Party activists at the NY State Fair in Syracuse in August 2014.)

There is a planetary emergency happening now and our Green New Deal agenda rises to the challenge of addressing the climate crisis and generating meaningful work in the transition to a renewable energy economy.

Racism and the war on working class people has created a New York that is the most segregated state in the nation with the widest gap between rich and poor in history. The communities most in need are not only denied essential services but are under siege by a militarized police force. 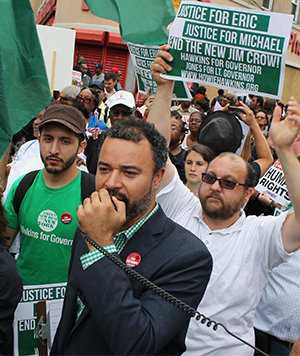 That’s why Brian Jones marched on Staten Island to protest the killing of Eric Garner by the police. Together, we have spoken out against the killing of Michael Brown in Ferguson, Missouri. We call for an end to the militarization of the police and for independent federal investigations of police brutality. We want to legalize marijuana and end the War on Drugs that only yields mass incarceration. (The picture to the right shows Brian Jones at the Justice for Eric Garner March on Staten Island in August 2014.)

I have been speaking at rallies across the state in favor of a $15 an hour minimum wage and the need to crack down on wage theft that costs workers in NYC alone more than a billion dollars a year.

The Hawkins/Jones campaign is organizing on college campuses in support of free tuition at SUNY and CUNY and forgiveness of student debt.

The Green Party is demanding that New York make up the cumulative $9 billion shortfall in Foundation Aid funding for our schools. We want to end the push for  privatization of our schools using Common Core-aligned high-stakes testing to “fail” the students, teachers, and schools in disadvantaged communities and turn those public schools into non-union private charter schools.

You can read all about our campaign platform at www.howiehawkins.org.

One thing is certain - New Yorkers overwhelmingly support the Green Party platform. But we need your help to make sure that on Election Day, New York’s progressive majority knows that Howie Hawkins and Brian Jones are the choice that puts the needs of people and the planet before corporate profits.

Join our campaign by donating and volunteering. Together, we are making history.

Now, for the future,

P.S.: The campaign finance reports in mid-July showed that I and Cuomo had nearly the same number of donors. A perfect metaphor for the 99% vs. Governor 1%, Cuomo’s average donation of $7,723 was 100 times my average donation of $77. There are more of us than there are of the plutocrats backing Cuomo! If everybody pitches in with a contribution, we can give the predatory financial oligarchs and their representative, Andrew Cuomo, a real run for their money.